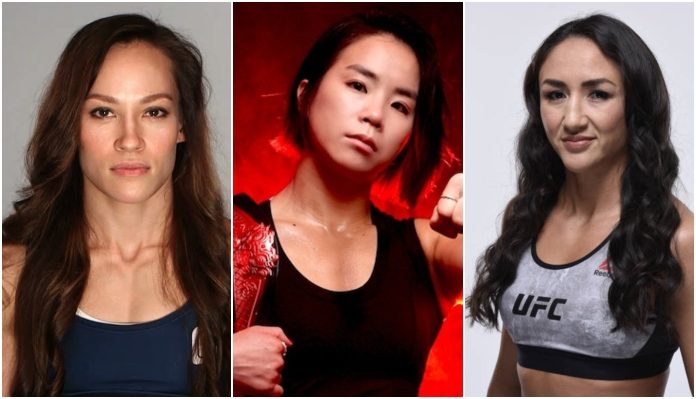 As the UFC seemingly continues on with the process of getting rid of their men’s flyweight division, it would also seemingly open the door to it being replaced by another division.

As most believe, including UFC veteran and former Strikeforce champion Josh Thomson, the most likely replacement for it would be a new 165-pound men’s division despite UFC President Dana White’s constant denials of it being a possibility.

However, assuming that flyweight will indeed soon be completely gone from the promotion in a matter of months, what if instead of an entirely new division, the UFC brought in the last one that they don’t already have? That being none other than the women’s 105-pound atomweight class.

Now, this would come as a surprise to most, of course, as the hardcore fanbase presumably contains the majority of those who are already aware of the division and the talent it possesses. But as a matter of fact, there have been some interesting hintings towards the possibility of the division coming to the UFC.

In November, flyweight prospect Asha Roka suggested that the division was being rumored for the next season of The Ultimate Fighter. Obviously, this would be nothing new by the UFC as they did this exact same thing for the strawweight and flyweight divisions with seasons 20 and 26.

“Rumour is that ufc might be doing a atomweight ultimate fighter… 😉 ummm interesting!!! If this is true shall I go for it ✌🏽🔥 #ufc @ufc” Roka’s tweet read.

On top of that, when speaking with BJPenn.com last week after her title defense at Invicta FC 33, the Invicta atomweight champion Jinh Yu Frey shared the following when asked about the division potentially coming to the big stage.

“I’ve heard from two people who work pretty closely with the UFC,” Frey said. “Both sides. One says it’s not happening any time soon. The other person says, ‘I’m pretty sure it’s gonna happen pretty quickly,’”

Despite the rumblings, the champion doesn’t think the removal of the men’s 125-pound division is a good sign for the atomweights.

Regardless, it brings us to an interesting topic to ponder and take under the MMA microscope on this holly jolly Christmas. So with all that said, happy holidays…and let’s see if it’s the atomweights time to come to the UFC and why it could or couldn’t work.

How deep is that lake?!

For several years, the division wasn’t far off from the shallowness that is commonly seen at 145-pounds for the women. Or at least that’s how it had/has seemed from a glancing view.

In the more recent years though, on a worldwide scale, the 105-pound talent pool has grown immensely and now plays host to numerous very high caliber athletes.

When it comes to the best singular division by promotion, however, Invicta has always been able to make that claim as they’ve showcased the 105ers since their creation in 2012.

Always spotlighting new up and coming fighters no matter the division, Invicta has arguably done their best in that regard with the 105-pound weight class as seen in the cases with former champions like Michelle Waterson, Jessica Penne, and Herica Tiburcio just to name a few. For more recent cases we can look at recent title challenger Minna Grusander and unbeaten top prospect Alesha Zapitella.

As deep as the division has now become, the problem in its case and it potentially coming to the UFC is the fact that they’re all scattered about for the most part. As with Asakura and Rena, it would be hard to imagine RIZIN letting two of their biggest stars get away from them at any point in the near future.

Meaning the real negative with this considered would be that the UFC would just never get to make those must-see fights between the very best in the division or they would have to wait a while to do so.

Want to know what would make for pretty good compensation with that last consideration? We would definitely see some UFC strawweights dropping down in weight.

As has been seen with each divisional addition in the UFC, fighters are going to move around. And former UFC strawweight champion Carla Esparza has already called for atomweight to be brought in along with suggesting that she would surely make the move as well. When seeing how things played out in her last fight, size definitely wasn’t in her favor.

In terms of other top strawweight staples, it wouldn’t be crazy to imagine the likes of Tecia Torres trying her luck in the division either as she is one of the smaller women at 115-pounds that cuts very little weight. Throwing her into the mix with the best at 105 would give us even more incredible possibilities when it comes to matchmaking.

Dear MMA gods, please give us Rena vs Torres one day…

Perhaps there would even be some returns with the previously mentioned Michelle Waterson and Jessica Penne who put on one of the greatest women’s bouts in MMA history in 2013.

Penne actually happens to be making an overall return in February as she hopes to snap a three-fight losing streak dating back to 2014. If she is to lose, an atomweight division could be her last chance at keeping a roster spot as was seen in similar situations with Jessica Eye and Bec Rawlings at flyweight. Maybe it would be the revitalizing move she may need just as was the case with Eye who has won three-straight since doing so.

With the new wave of talent surging through at strawweight right now, it will be interesting to see how the landscape can soon drastically change and how it could change with atomweight as an option.

The perfect face that runs the place

The UFC has made it very clear that when someone is what they believe to be marketable, regardless of skills, they’ll happily give them a spotlight. Luckily when it comes to atomweight, there’s currently a very skilled star just waiting for that spotlight to be expansively shined on them.

With the Invicta atomweight champion Jinh Yu Frey, you’re getting one of the best fighters in the world, period. Already one of if not the face of Invicta, over the years Frey continues to grow in her popularity and has a well-established fanbase thanks to her talent and personality.

Having been with Invicta for as long as she has and being their longest-tenured athlete, Frey became the champion this year which makes this the perfect time for the UFC to capitalize on creating the division with someone that will not be hard to promote. Or…one that shouldn’t be anyway. We see you, Demetrious…

There legitimately is not a better natural atomweight that the UFC has as an option to immediately be the face of their newest division than Jinh Yu Frey. Invicta champions are also always getting the call-up to the big show as the promotions work closely together. Therefore the UFC would have no excuse if they weren’t able to make something happen.

With all the excitement that can be brought with fighters of any shape and size, history has shown that the smaller the person, the less interest from your casual viewer. Thus the reason flyweight received such little respect. Although, that could boil down to an organizational issue as well.

Assuming the UFC were to learn from their mistakes and do things right promotionally with 105-pounds, it makes one wonder if the lack of interest would be there like it was for men’s flyweight.

When looking at things statistically as well, the lighter the weight class, the lower the finishing rate. Which when pointed out is bothersome. And it’s also the case for strawweight and men’s flyweight in the UFC.

With that in mind, it does make it hard to imagine and probably the biggest, if not the only reason why the UFC wouldn’t bring in the atomweight division especially at any point soon. But again, there are some mistakes to be learned from.

In conclusion, right now is definitely the best time for the UFC to jump on the atomweight train otherwise Asia will continue to be superior to them in that department. Which wouldn’t be a crazy battle to see them wave the white flag at but also a questionable one since they have just recently opened a new Performance Institute in China.

None the less, gambling on the size issue may be too big of a risk for the UFC to take their chance on and looking at their history accompanied by stubbornness, learning from the past mistakes is a longshot.

Even though it should be, 2019 probably isn’t the year for the atomweights to come to the UFC. But if we have learned anything in the past, especially in MMA, when there’s smoke there’s fire.

Check out the previous articles in the Under the MMA Microscope series here: