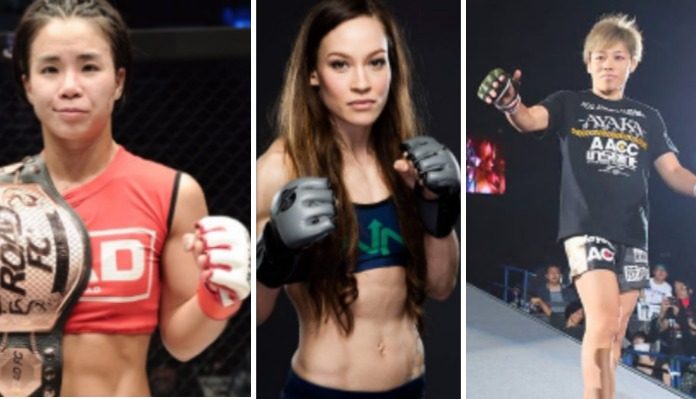 The UFC is currently home to 12 different weight classes. Four of which belong to the female competitors. That’s also four more than was ever expected 10 years ago.

As for the women, their lowest division is the 105-pound atomweight division which actually has a pretty solid amount of talent around the world ranging from the likes of Rizin standouts, Rena Kubota, Ayaka Hamasaki, and Kanna Asakura to former UFC strawweight and current Road FC champion Seo Hee Ham. Then there’s Invicta FC’s division which includes the likes Minna Grusander and current champion Jihn Yu Frey among others.

It isn’t crazy to imagine the division finding itself in the UFC one day but it doesn’t seem to be something that is really on the minds of anyone. Except for some of the current UFC strawweights. One of which being the inaugural UFC and Invicta strawweight champion, Carla Esparza who recently made it clear that she believes it’s time for the UFC to add a fifth female weight class.

Women’s MMA has come so far these last few years! Since November 2012, the UFC has welcomed 4 female divisions!! To make this complete, I think the 105lb ATOMWEIGHT DIVISION needs to be brought in! There are so many exciting match ups to be made in this stacked division, with myself included! If you agree and want to see the UFC welcome the atomweights, please share this post and tag @ufc @danawhite @mickmaynard @seanshelby 👊🏽👊🏽😉 #ufcatomweight

Esparza has always been one of the smaller strawweights which is what made her success all the more impressive. It hasn’t been until more recently where she’s had some trouble being fairly outsized by the likes of her recent opponents Claudia Gadelha and Tatiana Suarez who she both suffered defeat to.

An atomweight division wouldn’t just benefit Esparza though. Perennial top contenders Tecia Torres and Michelle Waterson are also two of the smaller 115ers who don’t cut much weight. As many may remember, Waterson was even the Invicta atomweight champion prior to her signing with the UFC.

When it comes to the female weight classes, the five that range from 105 to 145 are the primary divisions so it really could just be a matter of time before we end up seeing it installed.

Is it time for the UFC to at least start to think about the addition of the 105-pound weight class?