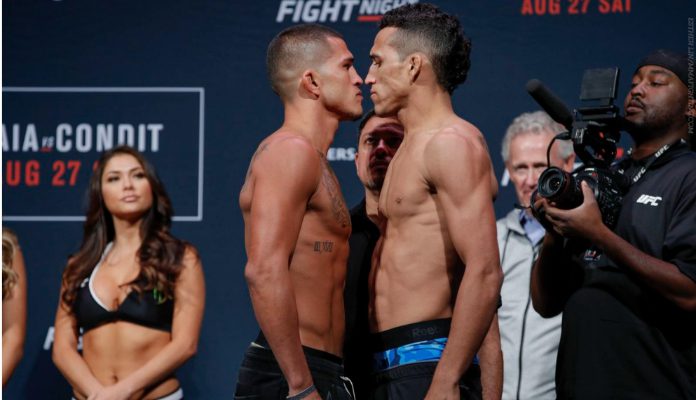 Anthony Pettis is pretty amazed by what Charles Oliveira has accomplished.

Pettis and Oliveira fought in 2016 at featherweight and ‘Showtime’ ended up winning by submission. After the fight, Pettis said Oliveria’s striking was getting better but he didn’t think the Brazilian would turn his career around and eventually become the UFC lightweight champion.

“We fought at 45, and I knew he was good, his striking was a lot better than what I expected, and his jiu-jitsu is some of the best the UFC has ever seen,” Pettis said about Oliveira on Just Scrap Radio on BJPENN.com. “To see what he is doing now is amazing. He found his rhythm, he found his groove and he is probably even surprised he got to this spot. MMA is different it’s not like boxing where you lose one fight you are out. It takes some time to put things together and then you need the confidence to match them. To see what he is doing right now is pretty amazing.”

Charles Oliveira has since beaten the likes of Justin Gaethje, Dustin Poirier, Michael Chandler, Tony Ferguson, Kevin Lee, and Jim Miller among others. With that, Anthony Pettis says the Brazilian is closing in on being the lightweight GOAT and has a chance to clear out the division with a win over Islam Makhachev at UFC 280.

Do you think Charles Oliveria will clear out the lightweight division with a win over Islam Makhachev as Anthony Pettis says?