Alexander Volkanovski offers to be backup fighter for Charles Oliveira vs. Islam Makhachev

UFC featherweight champion Alexander Volkanovski is serious about his move to lightweight.

‘The Great’ is fresh off his decision victory over Max Holloway at UFC 276 last month. The win moved Volkanovski to 3-0 in his series with ‘Blessed’. Following the bout, the Australian made it clear he wants to move up to lightweight.

Even prior to his last fight, the featherweight titleholder spoke about attaining double-champion status. However, the issue is that he would have to wait a bit for a title shot. UFC 280 in October is set to feature Charles Oliveira and Islam Makhachev fighting for the vacant lightweight title.

‘Do Bronx’ famously lost his belt on the scales prior to his win over Justin Gaethje in May. In the event that there’s an issue with someone fighting at UFC 280, Alexander Volkanovski has a solution. He wants to be the backup fighter for the main event.

In an interview with Daniel Cormier, the UFC featherweight champion discussed his plan. Volkanovski revealed that he’s currently in training, and would love the chance to fill in if need be. 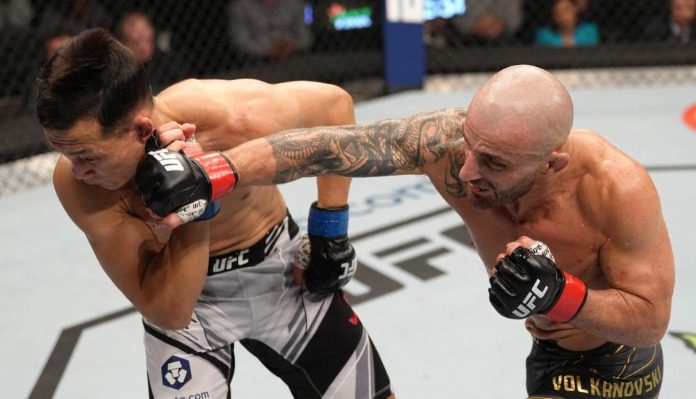 “I want to get back in. I’m actually thinking, believe it or not – I’m thinking of, because I’m still training, of being if they need a backup fighter, I’m gonna be the guy that’s gonna be there… I’m telling them I want to be there. I want to be the backup. I’m going to be fit enough, I’m going to get enough of a camp to stay in good enough fitness, and I’ll do it. That’s the type of guy I am.” (h/t MMAJunkie)

“As I always say, I’ll make sure no one else can take that opportunity away from me. Because if someone else goes and does that, you know what I mean, then that puts me on the side and then I got to wait even longer. I don’t like that. I’m happy to sit there and if someone gets injured, or doesn’t make weight, or whatever, I’ll slip in.”

What do you think about Alexander Volkanovski’s comments? Sound off in the comment section below!

This article appeared first on BJPENN.COM
- Advertisement -
This article appeared first on BJPENN.COM
Previous articleDana White appreciates Oscar De La Hoya’s apology, but will never be friends: “That guy did way too much damage”
Next articleDominick Cruz says if he doesn’t become a three-time UFC bantamweight champion this would be “pretty useless”