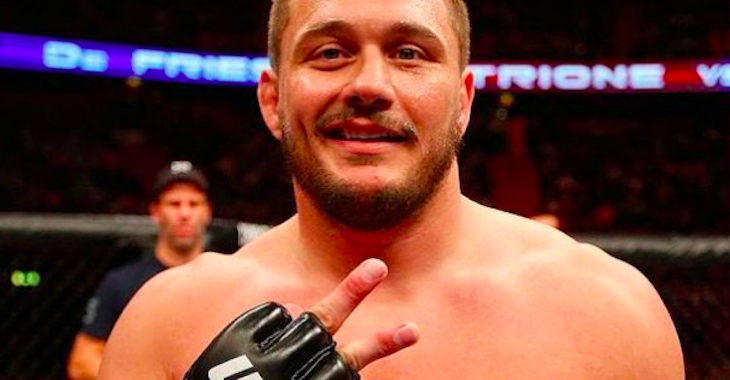 “No, I do not [think winning the Bellator world grand prix makes me the top heavyweight]. Stipe [Miocic] is the No. 1 guy in the world. I don’t think anybody can argue that at all. I think it would be really dope to have the chance to compete against him. If the Ali Act ever got passed, I think that would be really dope and I think it would be great for the fans. Then I find out, ‘Are you really that good or not?’”

.@mattmitrione, who headlines #Bellator194 tonight, isn’t even going to pretend anyone but @UFC​ champ @stipemiocicufc is the No. 1 heavyweight. More: https://t.co/qPbJ0xssR2 pic.twitter.com/nE2h2eairy

“I think it would be great to have — to get rid of individual promotions. You can’t compete against each other, and I think that’s kind of silly. The American League and the National League [in baseball] compete against each other. It happens all the time in every other sport, so why not this one? It doesn’t make sense. I look forward to proving to myself that I am the best heavyweight in Bellator. Roy Nelson, he’s the next person, and he beat me. It would be foolish to say anybody else [is a tougher fight].” — Matt Mitrione speaking to MMA Junkie.

As chaotic as the UFC is at this point, wouldn’t it be really cool if the champions from other organizations could fight the others? Unfortunately, it’s not possible given the certain structure of the business. Our own BJ Penn was once stripped of his UFC welterweight title for signing with K-1 to fight in Japan while – according to the UFC – still under their contract. While we can’t see the winner of the Bellator grand prix fighter Stipe Miocic, we can at least enjoy the most exciting tournament in all of combat sports.