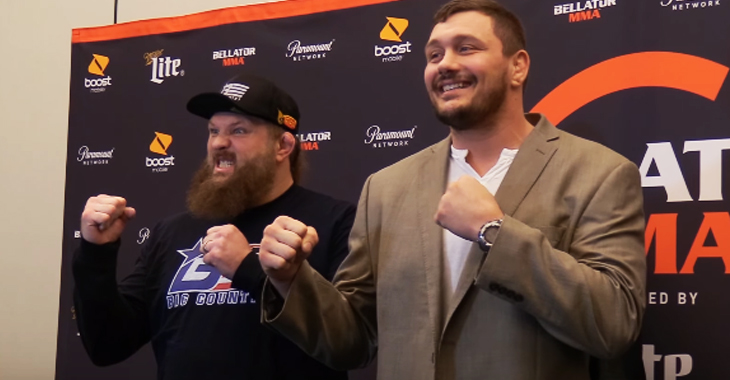 For those of us who have been following MMA since the beginning, we have fond memories of arguably the pinnacle of combat sports: The grand prix. Whether it be one night or a tournament spread over multiple dates, the grand prix is the ultimate test of any MMA fighter. With the Bellator heavyweight grand prix, a whole new generation of fans have a chance to get exposed to this spectacle for the first time. The second bout in the tournament is former UFC fighters Roy Nelson and Matt Mitrione facing off this Friday. They explain why this format is awesome.

“The one thing I love about the grand prix is it allows fans to follow MMA. It makes it simple. It’s just like people who don’t watch college basketball, when March comes, they watch college basketball. […] The one thing about the grand prix, it’s not really knowing the opponents, it’s knowing that: If I win three fights, I’ll be champion. Plain and simple. […] I’ve been in other organizations where I’ve won three in a row and then every time it’s always like, “Oh, you just win that next one [and you’ll get the title shot.’ I think it went on like that for Junior dos Santos after he cleared out the whole heavyweight division pretty much.” — Roy Nelson speaking to MMA Junkie.

“I was salty about [not getting the title shot right after three wins]. I didn’t think it was legit. I earned that position. Especially with the way I beat Fedor [Emelianenko], I earned a title fight. I could have sat this out, but why miss a hell of an opportunity? This is not a heavyweight tournament. It’s a superfight tournament. It’s the most exciting thing going on in our sport — whether it’s UFC or Bellator. Fighting Roy is an IQ test, that’s what it is. If you stand in front of him and trade off, you’re likely to fail the IQ test. If you fight him mobile and long, the way I fight normally, you’re likely to pass that IQ test.” — Matt Mitrione speaking to ESPN.

The grand prix not only puts the fighters through a grueling test, but turns the fights into a sort of an episodic drama that plays out — in Bellator’s case — throughout the year. Whoever wins between Roy Nelson and Matt Mitrione tomorrow night, they get ever closer to that vacant Bellator heavyweight title. However, Chael Sonnen and the winner of Fedor Emelianenko versus Frank Mir, as well as the winner of Bellator light heavyweight champion Ryan Bader versus King Mo will be waiting on them.