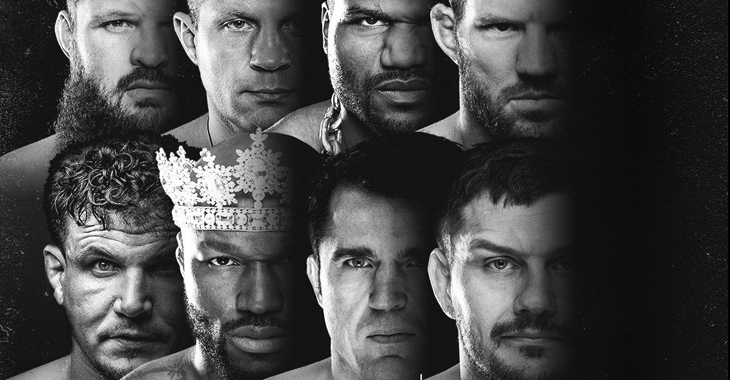 Earlier this month, Scott Coker and the team at Bellator dropped a bombshell: That they’d be putting on a heavyweight grand prix to finally crown a new heavyweight champion. They added UFC veterans, legends, light heavyweights and even the light heavyweight champion, Ryan Bader. The tournament has always been one of the most exciting things in combat sports, and this should be no different. Rory MacDonald and Shane Carwin have offered to be alternates in the tournament, but barring any injuries, here is the complete opening bracket below. After the news dropped, Chael Sonnen joined Brett Okamoto at ESPN to weigh-in on the match-ups.

Just announced on @SportsCenter: The Heavyweight World Grand Prix bracket is set and kicks off Jan 20th in LA with @ChaelSonnen vs @Rampage4real!! pic.twitter.com/jEB9pPg4wD

“Rampage and I have heat that goes way back. Last time we were together, we had to be separated in a hotel lobby in Arizona. I always thought that match could happen, but I thought it was impossible because he was going back to the UFC. Contractually, I’m not privy to how that worked out, but I’m happy it did. What other reason is there to fight than two guys want to?”

“Ugh, Mitrione got a bad deal in some ways. He was one fight away from being a world champion. Now he finds out he’s three fights away. He and I must have had completely opposite perspectives when we got the news. He must have said, “Oh, geez, you’re telling me I need to win three fights?” I got the phone call and said, “Wow, I can win three fights and be a world champion? I didn’t see that coming.” I think Mitrione is the best heavyweight out there. When I say that, it’s usually met with resistance, but it’s my opinion and I mean it. They have fought before though, and Roy beat him (December 2012). That does matter and they both remember that.”

“Love this fight. Pride champion vs. UFC champion. I don’t know if I agree that Fedor’s been as rusty as others think. You take that Mitrione fight (TKO loss in June), Fedor knocked Mitrione out — it just turned out he was knocked out at the exact same time. That was just a really weird match. But go back to when Fabricio Werdum beat him (June 2010), none of us knew how good Werdum was. Take when Antonio Silva beat him (February 2011). You want to talk about size disadvantages? Silva goes in there close to 300 pounds. I would never take my eye off the Fedor ball. I have always respected him and still do.”

“I didn’t fully get it at first. You’ve got the light heavyweight champion in Bader, taking on a fellow light heavyweight in Mo, but the belt isn’t on the line. So, let’s say Mo wins, beats the light heavyweight champion … he doesn’t become the champion? Just the drama in that is compelling. It’s going to piss a lot of people off, which is good for the sport, right? Get people arguing about something. Those are the two most athletic guys. They actually met up in college wrestling (in 2003), quarterfinals of the NCAAs, and Mo beat him pretty soundly. So, Mo knows he can beat him, believes he can beat him — and Bader wants that back. That’s very interesting.”