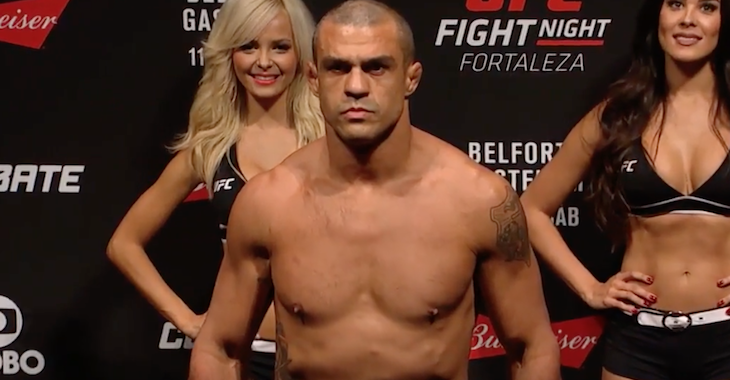 What has been a fantasy matchup to longtime fans for the past decade appears to be on it’s way to reality. MMAFighting reports that a fight between former UFC light heavyweight champions, Vitor “the Phenom” Belfort and Lyoto “the Dragon” Machida is in the works for UFC 224 in Brazil.

Both Brazilian legends have had incredibly similar results in their last six fights. Each has gone 2-4 in the spans of six outings and the first to kick them off was a loss to Chris Weidman for each(both were title fights). After that, Belfort would rebound with a quick knockout win over Dan Henderson and Machida with a quick TKO over CB Dollaway. After each wins…both men would drop three straight, all by finish(Belfort’s knockout loss to Kelvin Gastelum was however overturned after Gastelum tested positive for marijuana).

But now, the veterans in the twilight of their careers have earned recent wins. Machida’s came very recently in the main event of UFC Fight Night 125 in Belem, Brazil when he defeated the talented prospect, Eryk Anders by split decision. Belfort’s last win was a decision as well, dating back to June at UFC 212 when he defeated Nate Marquardt.

The Phenom, Belfort was actually supposed to fight in what was expected to be his retirement bout just a few weeks prior to Machida’s fight with Anders. But for Belfort, his fight did not happen as his opponent, Uriah Hall was hospitalized due to weight cutting complications.

UFC 224 is yet to have it’s headliner but it was rumored that UFC featherweight champion, Cris Cyborg would potentially be defending her title against fellow Brazilian and fellow UFC champion, Amanda Nunes at this event. That though is clearly not going to be the case anymore as Cyborg is defending her title against Yana Kunitskaya at UFC 222. Nunes has still been linked to the event with the possibility of defending her bantamweight crown against Raquel Pennington.