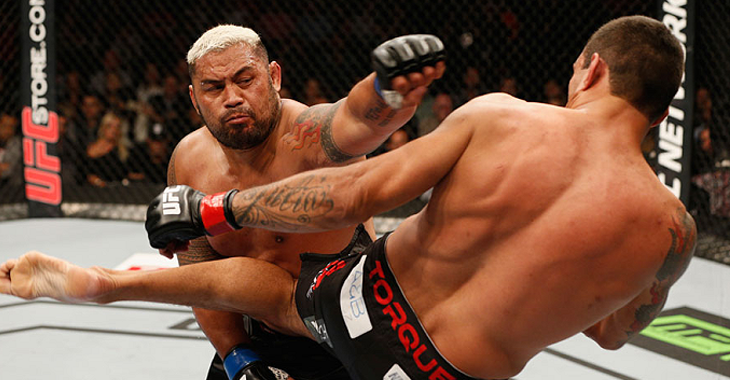 Now that UFC heavyweight Mark Hunt has been medically cleared to fight in the Octagon again, all he needs is an opponent.

Speaking with Sporting News, “The Super Samoan” is still looking to get a rematch with former UFC heavyweight champion Fabricio Werdum after losing by TKO at their UFC 180 match in 2014.

“Hopefully I get a fight in Perth – we’re waiting for Werdum to say yes, but he’s such a little chicken rat,” Hunt said.

“I’d like to be on the undercard for that world title fight for Rob Whittaker. That would be awesome being a part of history right there in Perth.”

After campaigning for a rematch with Werdum with no luck, Hunt accepted a fight with Marcin Tybura at UFC Fight Night 121 but was pulled from that matchup due to his controversial article published about his mental health. Werdum then stepped in on late notice to fight Tybura, which left Hunt scratching his head. “I don’t know why Werdum doesn’t want to party,” he said.

“We asked to do Japan, we asked to do Sydney and he said no. Then the next minute gets the fight against Tybura.

Hunt said Werdum is afraid of getting knocked out and that he got lucky in their 2014 clash. Hunt is eager to get back to competition against the best in the world so that he can work on his goal of becoming UFC heavyweight champion. “Hopefully they’ll give me someone in the top 10 – someone above me – and all I can see is that Werdum is the only one available. I don’t know what’s happening with Cain – he hasn’t fought in forever. Alistair (Overeem) is still looking for his soul somewhere after getting upper-cutted out of the universe, and Ngannou’s got the title shot.

“If I can get over Werdum, I should be next in line to fight the champ. I could be champ by next year.

“Now it’s just about getting Werdum to say yes.”