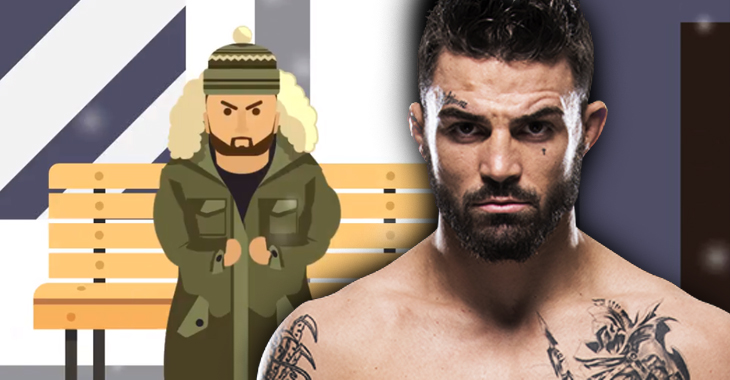 Remember the time @PlatinumPerry bumped into @darrentill2 on the cold streets of Poland and warned him about getting a “Tetris shot”? These are the animated tales of #TheMMAHour. (Animation by the great @caseharts.) pic.twitter.com/MF4eQm2lus

Everyone knows about Darren Till’s confrontation with Mike Perry at UFC Gdansk after he finished Donald “Cowboy” Cerrone. The two had a wild yelling match that hyped everyone up for a fight we have yet to see. However, you may have no heard Perry’s story from The MMA Hour about meeting Till for the first time on the streets of Poland. Even if you have, not only is it a story worth hearing again, but you’ve definitely never seen it quite like this. Animator Case Harts teamed up with MMA Fighting to turn the tale into an MMA cartoon classic.

“I was out in Poland. I’m in a coat, I’m bundled up. It’s f-cking cold out there, right?. I’m sitting. Waiting for my girl inside the mall. I was pissed at her so I went outside to cool down. She pissed me off. All this shopping, spending all my money and sh-t. So, I go outside that’s why I wasn’t inside. Darren Till comes walking by, he’s got thin little Reebok jacket on and he’s got 15 people with him. I’m sitting there by myself and this was before [he and Donald Cerrone] fought. The night before weigh-ins.”

“So, he’s at his worst health position in life — cutting that much weight, hes dehydrated — and he’s got his fight shorts on. Skin-tight, Vale Tudo shorts and a little thing jacket. I didn’t even know if he had shoes on. He’s walking in Poland — first of all, he’s going to get like a rusty nail in his foot and he’s gonna’ need a Tetris shot. I was like, ‘Hey man, put some clothes on man. It’s cold out here,’ or some sh-t. Then he was like, ‘I’m strong.’ I said, ‘That got nothing to do with the cold.’ He said, ‘I’m on weight.’ I said, ‘Good for you, man. You’re gonna’ be f-cking sick tomorrow.’ Dumbass.” — Mike Perry speaking to The MMA Hour back in October.

Luckily, things turned out great for Darren Till in Poland. He never got sick and hopefully Till never needed that “Tetris” shot. We’re still waiting to see which of the top welterweights are finally announced to be signed to a fight with the Scouser. Mike Perry will be fighting Santiago Ponzinibbio this weekend at UFC Winnipeg. Hopefully if he wins, we’ll finally get that fight with Darren Till that we’ve been salivating for ever since their screaming session in the cage with Dan Hardy.