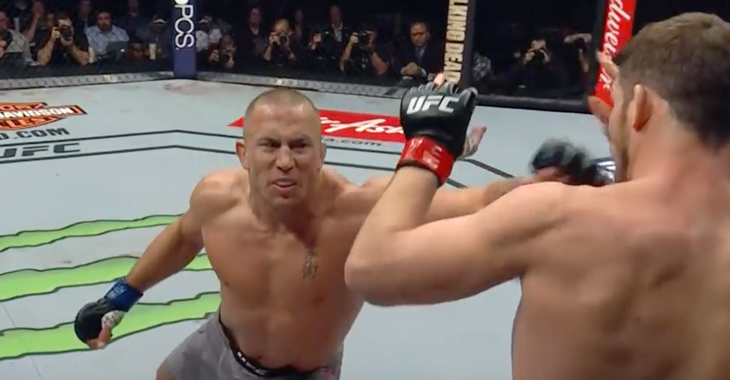 Just last week, Georges St-Pierre vacated his freshly won UFC middleweight title, directly promoting Robert Whittaker’s fight with Luke Rockhold in Perth for the undisputed belt. It was the fallout from his UFC 217 health scare that led to his decision. St-Pierre basically tortured himself to move up a division, which culminated in a ulcerative colitis diagnosis. It became so bad, the fight was almost called off. Now John Danaher admits he even though St-Pierre would lose in his impaired state.

“Halfway through this camp we knew there was something very seriously wrong. There was a point where we lost a week and a half of training. Even the day of the [Michael Bisping] fight, [Georges St-Pierre] was dealing with serious medical problems. I’m not going to lie to you, two weeks out I had a talk with Firas Zahabi and I said that the St-Pierre I saw train today gets knocked out by Michael Bisping. He did exactly what the plan was designed to do. He finished the fight with a beautiful strike setting up a submission hold. […] And he did it on a man above him in weight class. What made it all the more impressive if he did this with all the health problems he was dealing with.”

“That is a definite possibility [that St-Pierre’s UFC career could be over]. I don’t want to say yes or no because it’s not my decision, really. These are deeply personal decisions that Georges has to make. More over, they have to be made not as spur of the moment decisions. These are life-changing decisions, so they will have to made on the basis of Georges’ reaction to the medications that he’s taking for ulcerative colitis. From what I understand, the standard medications for ulcerative colitis take some considerable amount time to take effect – anywhere from three to eight months – before you’ll even notice any changes. We have to see how he reacts to his medication regiment and make a decision based on that.” — John Danaher speaking on The MMA Hour.

The fact that Georges St-Pierre achieved what he did is pretty incredible, especially given his condition. Danaher said there is a possibility that he never fights again, adding that there is really nothing left for him to accomplish. After his legendary career at welterweight, coming back out of a four-year layoff and winning a title above his weight class, it’s hard to imagine a better cherry on top of a UFC run. The only thing Danaher could possibly think of would be a belt in a third weight class, but brought up more health concerns in cutting all the way down to lightweight.