Yair Rodriguez is only focused on fighting Alexander Volkanovski for the featherweight title his next time out.

Rodriguez returned to the win column last time out as he beat Brian Ortega by first-round TKO due to Ortega’s shoulder popping out. It was a disappointing end to the fight, and after the event added, it was uncertain what would be next for him as Volkanovski is out with a hand injury and has talked about going up to lightweight.

Even if Volkanovski moves up to lightweight to try and become a champ-champ, Yair Rodriguez says he will hold out and wait for the champ. 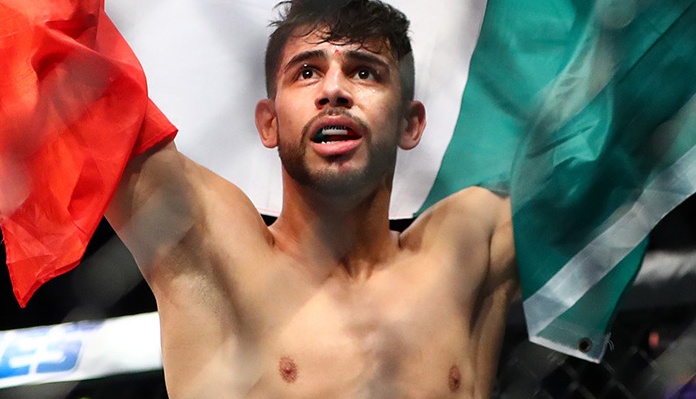 Although many have talked about a possible interim featherweight title, Yair Rodriguez says that will not happen. He doesn’t see the need in facing Josh Emmett as he thinks he is the rightful number one contender and should fight for UFC gold next time.

“No, I’m going to wait for him [even if he moves up to lightweight],” Rodriguez said. “Hopefully he wins the [155-pound belt] so it will be a bigger accomplishment for me whenever I get to fight him, and beat him. Why [would I fight for an interim] when I’m knocking on the door for the title? It doesn’t make any sense. I’m not fighting Josh Emmett, I’m fighting Volkanovski.”

Before the win over Ortega, Rodriguez made his return against Max Holloway and lost a very close decision. Prior to that, the Mexican beat Jeremy Stephens after the No Contest against ‘Lil Heathen’ due to an accident eye poke. He also holds notable wins over Korean Zombie, Dan Hooker, and Andre Fili.

Would you like to see Yair Rodriguez vs. Alexander Volkanovski next time out?