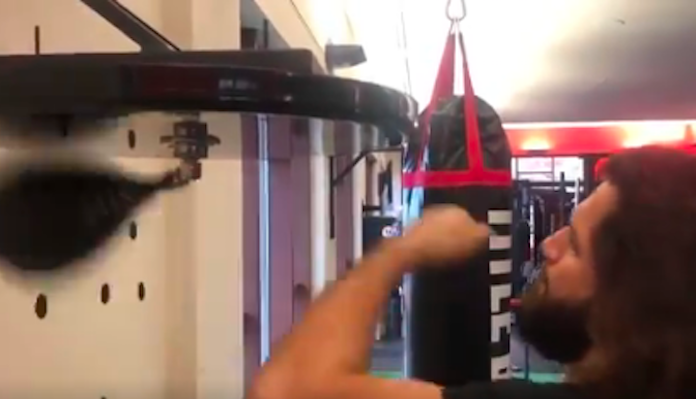 Jorge Masvidal continues to tease the possibility of a showdown with boxing superstar Canelo Alvarez, releasing a video on social media of his insane hand speed.

Masvidal has had the best year of his career in 2019, becoming a global sensation beyond the realms of even just the UFC and mixed martial arts. His wins over Darren Till, Ben Askren and Nate Diaz across the last nine months have really helped to take his star power to a whole new level, regardless of the controversy surrounding the encounter with Diaz.

Now, Masvidal appears to be setting his sights on Alvarez, who has already made it known that he is interested in the spectacle of the fight — despite believing that it wouldn’t be all too much of a challenge.

Not a boxer. A fighter #theresurrection #orale 🇲🇽 #mezcal pic.twitter.com/Bv9hO9e50n

There are plenty of different directions that Masvidal could go in, with each being as exciting as the last. The expectation is that he is now the set number one contender for the UFC Welterweight Championship, and is tipped to face the winner of Kamaru Usman vs Colby Covington.

There’s also a strong possibility that he could be taking on Conor McGregor in the not so distant future. McGregor made it clear that he would be willing to go head to head with the winner of Masvidal vs Diaz, but first, he needs to get past Donald “Cowboy” Cerrone — a man Masvidal has already beaten in the past.

The Canelo fight is possible in the sense that both men seem to have some form of interest in it, but as one of the top boxers in the world, the Mexican would enter the ring against Masvidal as a gargantuan betting favorite.

Then again, there’s always a chance that Masvidal could shock the world — which is what was also the main appeal of Mayweather vs McGregor.

Does a fight between Jorge Masvidal and Canelo interest you?