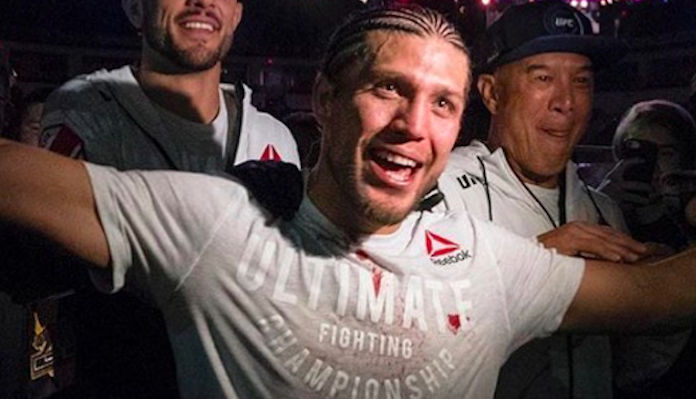 Brian Ortega will look a little different when he steps into the cage with “The Korean Zombie” Chan Sung Jung on Saturday night.

Ortega and the Korean Zombie will clash in the main event of UFC Fight Island 6 on the promotion’s “Fight Island” this Saturday night. Ahead of the matchup, Ortega has made a pretty significant change to his look.

Over the last few years, Ortega has sported long hair. At the Friday morning weigh-ins for his fight with the Korean Zombie, however, he revealed that he’s lopped off his luscious locks in favor of a buzz cut.

See his big reveal below:

Brian Ortega has not fought since a December, 2018 TKO loss to Max Holloway, which marked a failed attempt to claim the UFC featherweight title. Prior to that, he had never been beaten as a pro mixed martial artist, and was riding wins over the likes of Clay Guida, Renato Moicano, Cub Swanson and Frankie Edgar.

The Korean Zombie, meanwhile, last fought in December, 2019, when he picked up a first-round knockout win over Frankie Edgar, who stepped in to replace an injured Ortega on short notice. Prior to that the fan favorite Korean picked up another knockout win over Renato Moicano. That win was preceded by a knockout loss to Yair Rodriguez, which occured in the final second of a five-round fight most fans agree he was winning.

Who do you think will come out on top when Ortega and The Korean Zombie collide on Fight Island tomorrow night?