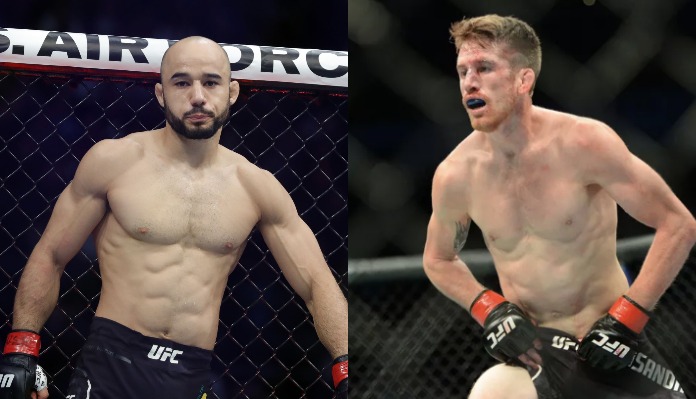 The former bantamweight title challenger, Moraes (23-7-1 MMA), was returning to action for the first time since scoring a controversial split decision win over Jose Aldo at UFC 245.

‘Magic’ had gone 5-1 over his past six Octagon appearances heading into tonight’s contest with Sandhagen. Marlon’s lone loss in that time came by way of TKO to the now-retired former champion in Henry Cejudo.

Meanwhile, Corey Sandhagen (13-2 MMA) had entered tonight’s bout with Marlon Moraes looking to rebound from his recent submission loss to Aljamain Sterling. Prior to being stopped by ‘The Funk Master’, Sandhagen was riding a seven-fight win streak which included victories over Raphael Assuncao and John Lineker.

Tonight’s UFC Fight Island 5 main event resulted in a sensational finish, but unfortunately for fans of Marlon Moraes, ‘Magic’ was on the wrong end of that highlight. In the second round of the fight Cory Sandhagen was able to land a spinning heel kick which connected flush on the head of Moraes. Marlon proceeded to drop to the canvas and after a couple of ground and pound punches the fight was waved off.

Check out how the pros reacted to Sandhagen defeating Moraes below:

I got my eyes on YOU!! 👀 #UFCFightIsland5

Big fight tonight for the bantamweight division! Who do you have moraes or sandhagen??….#UFCFightIsland5 @ufc

Level of skills in this fight it’s super high#UFCFightIsland5

This is about to be some high level mma right now

What a technical fight! #UFCFightIsland5

What a cute finsh! @funkmasterMMA you official been skip! 🏆🏆🏆 @danawhite

Who would you like to see Cory Sandhagen fight next following his TKO victory over Marlon Moraes this evening on Yas Island? Share your thoughts in the comments section PENN Nation!