Cejudo (16-2 MMA) has been calling for a fight with Volkanovski for some time, so when Max Holloway was forced to withdraw from his scheduled trilogy with the Aussie at UFC 272, ‘Triple C’ immediately offered up his services to Dana White and company.

”Hey @danawhite give me a shot at Alex. I would never cancel. I’m Mexican and we don’t believe in pulling out of anything.” – Cejudo tweeted.

Despite his efforts, Henry Cejudo was ultimately passed up in favor of the Korean Zombie, Chan Sung Jung. 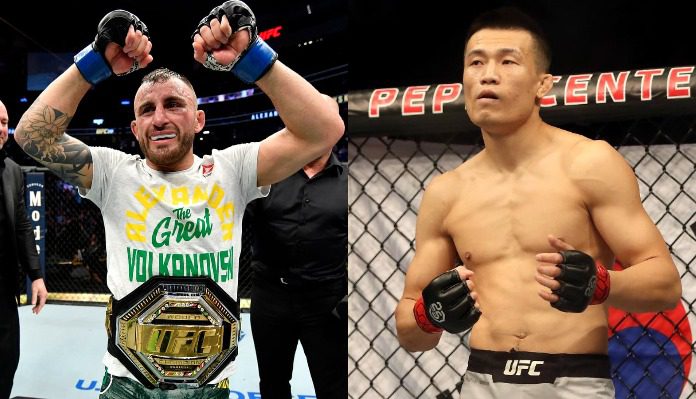 That title fight will now headline UFC 273, with Petr Yan vs Aljamain Sterling 2 also billed for the card.

Volkanovski’s decision to fight Zombie was not well received by Cejudo who shared the following reaction on Twitter.

Hey @alexvolkanovski it figures you would go for the Zombie…and not the guy that would turn you into the Walking Dead.

”Hey @alexvolkanovski it figures you would go for the Zombie…and not the guy that would turn you into the Walking Dead.”

Henry Cejudo last competed back at UFC 249 in May of 2020, where he successfully defended his bantamweight strap with a TKO victory over Dominick Cruz. Immediately following the conclusion of that contest, ‘Triple C’ announced his retirement from the sport.

With the opportunity to become ‘C4’ out of the picture, at least for now, it will be interesting to see if Cejudo attempts to pursue any other fights. The former two division champion recently received a callout from the aforementioned Dominick Cruz for a rematch. However, ‘Triple C’ showed no interest in wanting to run things back with ‘The Dominator’.

Do you think we will see Henry Cejudo return to the Octagon in 2022? Share your thoughts in the comment section Penn Nation!

This article appeared first on BJPENN.COM
- Advertisement -
This article appeared first on BJPENN.COM
Previous articleCharles Oliveira should “go for the money” and fight Conor McGregor next, says Khabib and Islam’s coach
Next articlePetr Yan on Aljamain Sterling rematch being pushed back to UFC 273: “UFC simply doesn’t want fake champion to headline”