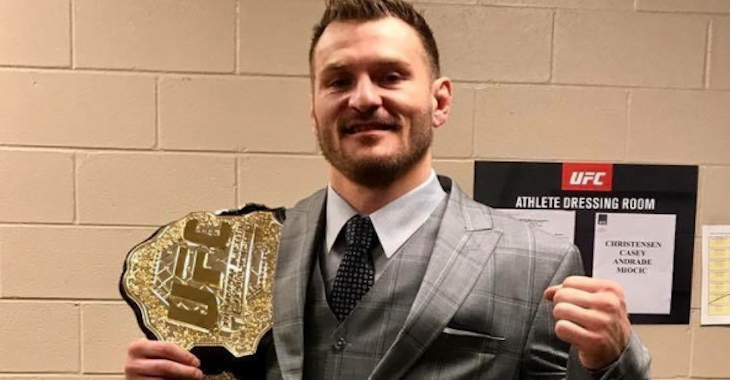 Stipe Miocic receives some NFL support prior to his UFC 220 title fight with Francis Ngannou.

UFC heavyweight champion of the world Stipe Miocic will attempt to make his third consecutive title defense at January’s UFC 220 event in Boston when he squares off with surging division contender Francis Ngannou.

Stipe has scored stoppage victories in each of his past five bouts, finishing Alistair Overeem, Fabricio Werdum, Andrei Arlovski, Mark Hunt and the aforementioned “JDS” in that time.

The proud native of Cleveland, Ohio was recently visited by some members of the NFL’s Cleveland Browns iu preparation for his highly anticipated showdown with Francis Ngannou on January 20.

Appreciate the homies @JOSH_GORDONXII and @Str8UpGlittle coming by last night to support me as I get ready to defend my title! #CLEAgainstTheWorld #AndStill pic.twitter.com/6J1hxrKnhP

As for Stipe’s UFC 220 opponent Francis Ngannou, “The Predator” is coming off a brutal fist-round knockout victory over Alistair Overeem which took place earlier this month at UFC 218 in Detroit.

That victory extended Ngannou’s current win streak to ten in a row, with six of those victories coming under the UFC banner.

“The Predator” has scored stoppage victories in all six of his UFC bouts, with four of those finishes coming in the very first-round.

Who do you think will emerge victorious when Francis Ngannou and Stipe Miocic throw down in the main event of UFC 220 in Boston on January 20? Sound off PENN Nation!