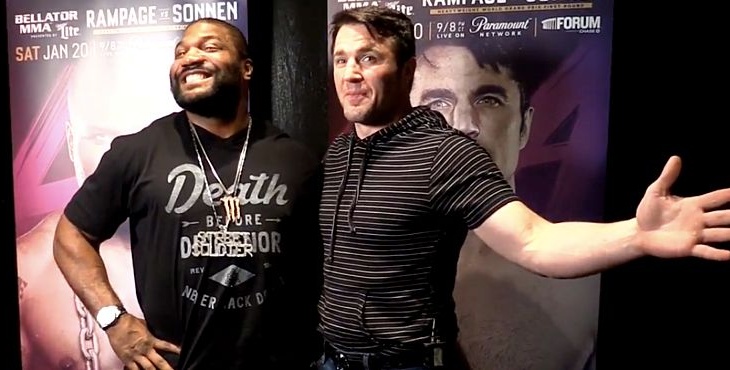 Rampage Jackson and Chael Sonnen will square off at Bellator 192 on January 20 in the first-round of the promotions heavyweight world grand prix.

The former UFC light heavyweight champion, Quinton “Rampage” Jackson (37-12 MMA), has not competed since suffering a unanimous decision loss in his rematch with Muhammed Lawal at Bellator 175 on March 31, 2017.

Prior to the setback, “Rampage” had strung together five-straight wins which included first-round knockout victories over Joey Beltran and Christian M’Pumbu.

Sonnen and Jackson recently squared off to promote their January 20 showdown at Bellator 192, check it out.

VIDEO: @Rampage4real and @ChaelSonnen face off for the first time ahead of their #Bellator192 heavyweight tournament fight today in LA pic.twitter.com/N9m8hHtJPw

As you can see, the former UFC light heavyweight champion, Rampage, is looking massive in preparation for his highly anticipated fight with Sonnen.

Who do you think will emerge victorious when Chael Sonnen and Quinton Jackson throw down at Bellator 192 next month? Sound off PENN Nation!