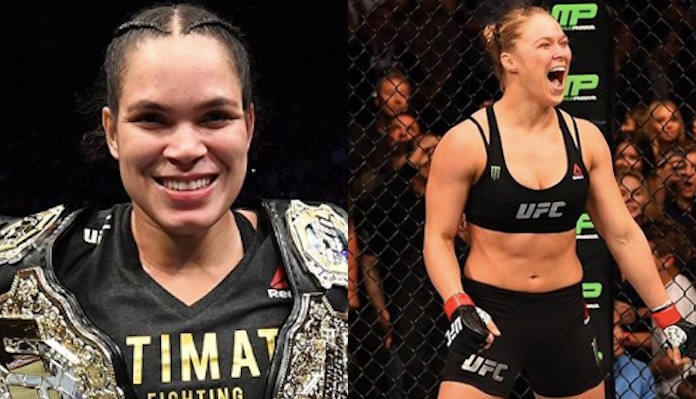 So, with far less MMA on the calendar than normal, BJPENN.com reached out to several women’s fighters to ask who the bantamweight GOAT is. To no surprise, the majority believe it is Amanda Nunes but Ronda Rousey’s name still came up.

Yana Kunitskaya, UFC bantamweight: Amanda Nunes and it’s not even a debate.

Arlene Blencowe, Bellator featherweight: Bantamweight hmmm. A few years ago I would’ve said Ronda because of how dominant she was in her time and for how many times she defended her belt. But, now, Nunes is the GOAT as she has beaten all the champions. The fact that she’s also a two-division champion in the UFC adds to it. But, I still think Holly has what it takes to get it back.

Irene Aldana, UFC bantamweight: I have to say Amanda Nunes because she is a two-division champion and the way she defeated Cyborg and Rousey. Also, she has been successfully defending her title against tough opponents.

Felicia Spencer, UFC featherweight: To me, the idea of the greatest can mean a lot of things, not always just a record or a skill set. If we are talking about dominance and record and who beat who, Amanda Nunes is probably the GOAT. But, to me, the ideas of the greatest are sometimes more than that. I still hold Ronda Rousey as the GOAT as she had the greatness that surpasses our sport. Her dominance at the time was amazing and she was active like no one had ever seen before.

Leslie Smith, Bellator featherweight: I’m going to have to go with Miesha Tate on this one. She got in, got her money, changed the whole industry through her accomplishments and personality and then got out of fighting. But, she is actively impacting MMA through her compote position in Singapore. I know most people will say Ronda Rousey but her influence, while huge and enduring, is no longer being added to.

Pannie Kianzad, UFC bantamweight: Amanda Nunes, no question about it.

Miranda Maverick, Invicta FC flyweight: Amanda Nunes, it’s obvious. No one has touched her at bantamweight. She has the talent, technique, composure, and the dominance she shows is unquestioned.

Sijara Eubanks, UFC bantamweight: Me. That’s my division. That’s like asking LeBron at the beginning of the season who is going to win the West [laughs].

Do you agree with the pros that Amanda Nunes is the women’s bantamweight GOAT? Let us know in the comment section.

Stay locked to BJPENN.com over the coming days to see who pros picked as the MMA GOAT.