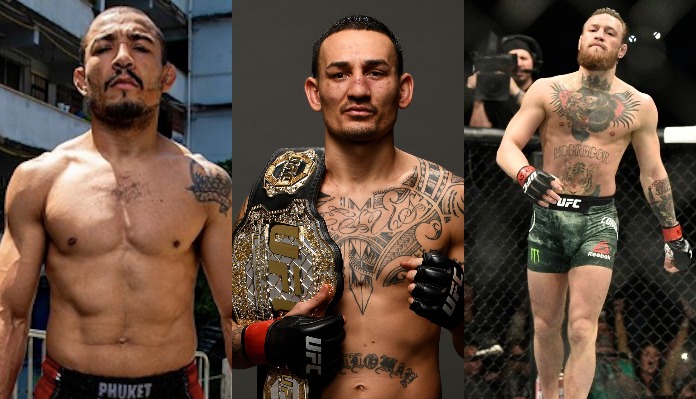 So, with little to no MMA on for the foreseeable future, BJPENN.com reached out to several current and former featherweights to ask who their divisional GOAT is. The majority believe it is Jose Aldo but it is a three-person race between the Brazilian, Max Holloway and Conor McGregor.

Featherweights Decide Who The 145-Pound GOAT Is

Alexander Volkanovski, UFC featherweight champion: I believe it’s Jose Aldo. Being a champ through so many years and title defenses is incredible.

Ryan Hall, UFC featherweight: In my eyes, the featherweight GOAT to date is Jose Aldo based on his longevity and body of work. Max Holloway has a legitimate claim, as well, but I would lean towards Jose. Conor McGregor and Alexander Volkanovski both have/had fantastic runs through 145 division, but lack longevity.

I would draw a line between greatest and best as one vs. one matchups aren’t indicative of dominance overall. In many cases, the skill of a fighter and their resume are not in sync. Fighters from later generations have the benefit/advantage of learning athletes who came up ahead of them. Not fair to make a direct comparison based on skill.

Artem Lobov, former UFC featherweight: To me, to be the best you have to beat the best and Conor did that. He beat Aldo, and people forget when he fought Aldo, Aldo was undefeated for 10 years. He was the top pound-for-pound guy and showed no signs of slowing down. Look what Conor did to him. Also, look at his climb up, he beat Dustin Poirier but people say oh Poirier is a different fighter since then. No, he has always been a killer, when Conor fought Dustin, Dustin was number five in the world. He was one of the best featherweights, huge winning streak and was putting guys away. Conor destroyed him in under two minutes. How impressive is that? He came out of nowhere, he didn’t have any money and no one knew who he was. No one has done what he has done so he is the GOAT at featherweight.

Sodiq Yusuff, UFC featherweight: It’s a pretty close race in my mind between Aldo and Max but I’m leaning towards Aldo because of his dominance for such a long time. But Max beat him twice with a similar resume of wins. It is a close race between them.

Jared Gordon, UFC featherweight: Jose Aldo. Only because he defended and was undefeated for so long.

Dan Ige, UFC featherweight: Aside from myself I believe Aldo is the greatest. He reigned on top forever in the WEC and UFC and was dominating everyone for a long time. Max and Frankie are up there too.

Billy Quarantillo, UFC featherweight: It has to be Jose Aldo still. What he did in the WEC and UFC is still the most impressive featherweight resume.

Steven Peterson, UFC featherweight: Jose Aldo was the most feared featherweight at his prime. He dismantled everyone at that time and made it look easy. It took years for someone to figure him out and I think he was past his prime when he fought and got KO’d by Conor McGregor. Had he been in his prime I think that fight would’ve gone differently. After that, he was never the same. While he was the champ he seemed unbeatable. That’s why I consider him the featherweight GOAT.

Jeremy Kennedy, PFL featherweight: It’s a tough one between Aldo and Max. Max had the longer winning streak within the UFC but has some early losses and his loss at lightweight doesn’t help either. Ultimately, I’m going to go with Aldo as he had such a long runt through WEC and then was the only UFC featherweight champ for years. He cleared out the division before Conor came. During his reign, he looked unbeatable and had never lost outside of that early one on his career.

Kyle Nelson, UFC featherweight: As of right now I think Jose Aldo is still the featherweight GOAT. He held the title in the WEC and UFC. Since he lost the belt it has changed hands a few times so I don’t think anyone else has earned the GOAT status yet.

Georgi Karakhanyan, Bellator featherweight: Who the featherweight GOAT is such a good question. I think it is Patricio Pitbull. He is a great fighter and has been killing it in Bellator. I was thinking about Aldo but Patricio is a champ-champ and he’s a very strategic fighter and is on a long winning streak.

Do you agree with the pros that Jose Aldo is the featherweight GOAT? Let us know in the comment section.

ICYMI: Pros have already picked the flyweight and bantamweight GOATs.