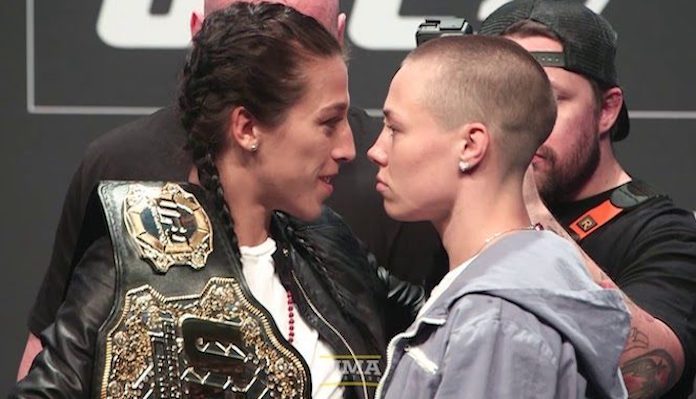 So, with little MMA on for the foreseeable future, BJPENN.com reached out to several current fighters to ask who the strawweight GOAT is. For many, it still is Joanna Jedrzejczyk but Rose Namajunas is right there.

Cortney Casey, UFC strawweight: Man I would have to say JJ, she held the belt the longest. Not taking anything away from Carla, Rose or Weili but she did defend the belt five times.

Roxanne Modafferi, UFC flyweight: I think Joanna is. I know Weili just beat her but she defended the belt so long and was so dominant as the champion.

Molly McCann, UFC flyweight: My GOAT is Rose Namajunas. Simple because of overcoming adversity. Through growing up and personal life. To being runner up on TUF and then absolutely smashing it after. I see similarities in her mental state as well as my own and how she has learned to overcome and deal with her emotions and emotional state I aspire to be like.

Bi Nguyen, ONE Championship atomweight: It is tough between Rose and Joanna. Joanna had the longest reign but Rose beat Joanna twice. I’ll say Rose but f**k that’s tough.

Aisling Daly, former UFC strawweight: Definitely Megumi Fujii is the strawweight GOAT. She had an unblemished record for close to a decade and was exciting and well-rounded. She was also one of my favorites.

Ashley Yoder, UFC strawweight: I think it’s a pretty close call between Joanna Jedrzejczyk and Rose Namajunas. These two ladies, in my opinion, have overcome adversity and became relentless champions and you can visibly see the growth in their styles and it stands out to me.

Sijara Eubanks, UFC bantamweight: Strawweight is easy and it’s Joanna. The division is till young and I think in 4-5 years she may get passed up but as of today, it’s JJ. She completely decimated the division for years before Rose came along and she continues to be top-three.

Kay Hansen, Invicta FC strawweight: The strawweight GOAT has to be Joanna. It’s a rather young division compared to men’s divisions and even the women’s bantamweight. I think Zhang could take that title once she defends the belt a few more times, but Joanna’s track record is unmatched so I’d say Joanna for now, but still open for discussion

Virna Jandiroba, UFC strawweight: I think the GOAT is Weili Zhang because she came to stay. Her fight with Joanna showed that. She’s gonna stay where she is for a long time in my opinion.

Lindsey VanZandt, Invicta FC atomweight: Joanna. She’s had the longest reign and the most dominant reign in the division.

Do you agree with the pros that Joanna Jedrzejczyk is the strawweight GOAT? Let us know in the comment section.