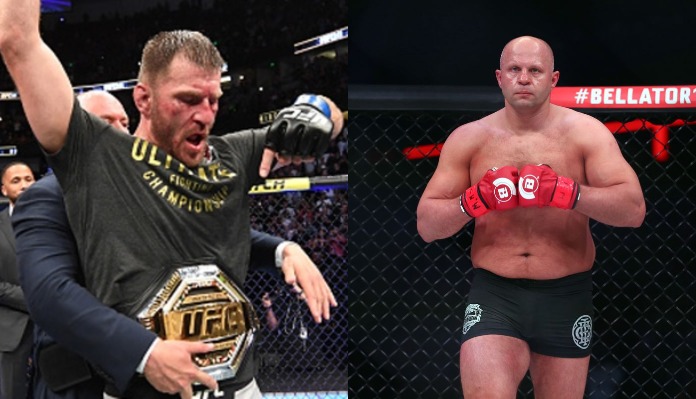 So, with far less MMA on the calendar than normal, BJPENN.com reached out to several current and former heavyweights to ask who their divisional GOAT is. The pros were split between Stipe Miocic and Fedor Emelianenko.

Heavyweights Decide Who The 265-Pound GOAT Is

Yorgan de Castro, UFC heavyweight: Fedor. I think he’s well-rounded and he’s very good everywhere. He was also undefeated for so long and was unbeatable.

Juan Espino, UFC heavyweight: I think the GOAT is Stipe Miocic. He keeps to his strategies and is very strong mentally and always finds a way to win. He can take you down or strike with you so I think Stipe is the GOAT.

Tanner Boser, UFC heavyweight: Fedor for obvious reasons. You are going to have a tough time getting a different answer from me.

Maurice Greene, UFC heavyweight: Stipe Miocic. How can you argue it? Two-time UFC heavyweight champion and most title defenses and look at his resume.

Juan Adams, ARES heavyweight: I personally think Mark Coleman. Just watching him fight you always knew it was going to be violent and his ground and pound is the best ever.

Allen Crowder, former UFC heavyweight: Stipe Miocic, he defended the belt the most amount of times.

Do you agree with the pros that Stipe Miocic is the heavyweight GOAT? Let us know in the comment section.