Dillon Danis says that Brendan Schaub ‘kind of’ gave him a heads up ahead of the infamous drive by balloon attack on him during his last appearance on Food Truck Diaries in 2020.

The Bellator star appeared on the MMA Hour ahead of his boxing fight with KSI in London. Danis covered a range of topics with Ariel Helwani, including the incident in which Jake Paul hurled water balloons and insults at the New Yorker whilst driving by in a truck.

Caught the biggest shit talker slacking @dillondanis you gotta check in when you come to La. #GenerousDriveBy pic.twitter.com/460MjnO3F6

Helwani suggested that there was a theory going around that Schaub told Jake Paul where he’d be filming with Danis so the former Disney star could ambush him. He then enquired why the BJJ prodigy would still go on Schaub’s show following such a ‘breach of trust.’

“I’ll tell you how it went. He didn’t tell me, but he kind of…He was like, ‘they were fishing around on text asking what time and stuff, I just want to let you know.’ That’s all he said to me …He kind of gave me a heads up but he didn’t …Maybe he did (give them the address.) I don’t really care.” 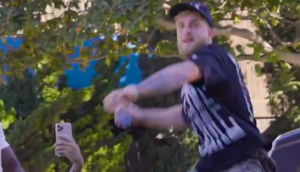 Schaub has previously admitted that he told Danis Paul might stop by and try something to ‘build the fight.’ Danis has a long-standing beef with both Paul brothers and has been linked to fighting both men at one time or another. The younger Paul brother has shown that he knows how to promote a bout as well as anyone in recent years. The 25-year-old has established an undefeated 6-0 record and has fought some big names in the combat sports world with his most recent victory coming against MMA legend, Anderson Silva.

‘The Problem Child’ has beef running with multiple personalties across MMA and boxing, but it looks like his next opponent will be Tommy Fury following a furious confrontation with John Fury in Dubai last month.

If Danis can get a win against KSI, then he could well be in the running to finally fight his old foe Jake. KSI famously beat Logan, so a win over the Brit for Danis could make him and intriguing proposition to fight either brother.

This will be the 29-year-old first fight since 2019. If he wins, would you want to see him fight Jake Paul next?