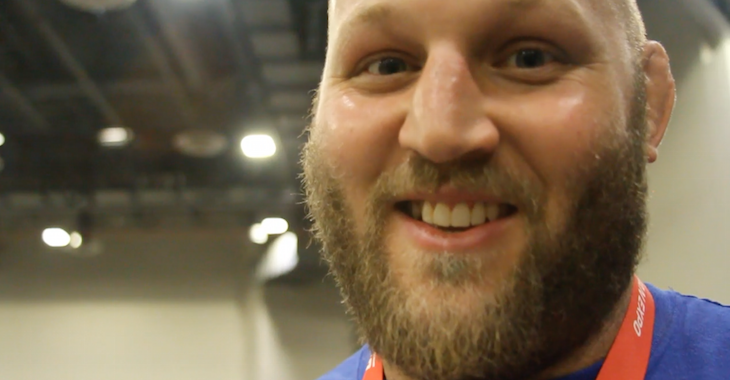 Last week, UFC welterweight champ Tyron Woodley and middleweight champ Michael Bisping made headlines by agreeing to fight at a catchweight of 180lbs. While it remains to be seen if the UFC actually makes this fight, it’s bound to ruffle a few feathers if they do.

Woodley, after all, is currently in the crosshairs of deserving welterweight contenders like Stephen “Wonderboy” Thompson, who he recently battled to a draw, and Demian Maia, who recently submitted Carlos Condit to extend his welterweight win-streak to 6.

Bisping, meanwhile, has a freakishly powerful former Olympian named Yoel Romero banging on his door, while contenders like Ronaldo “Jacare” Souza, Luke Rockhold, Robert Whittaker and Gegard Mousasi are all closing in on title shots of their own.

If the UFC were to pit Bisping and Woodley together, it would force all of the aforementioned contenders to wait for the title shots they’ve worked so hard to earn.

Ben Rothwell is not a contender at welterweight or middleweight. He is, however, a contender at heavyweight, where champion Stipe Miocic’s short break from competition has slowed down the contendership picture. As such, Rothwell feels for the fighters who would be left out in the cold if Woodley and Bisping were paired together.

His solution? Attempt to beat up Bisping and Woodley simultaneously in a 2-on-1 scrap.

Ok I'm deadly serious I'll fight @TWooodley and @bisping at the same time 2on1 and take both your titles. Let's all make money 💰 #ridicules

While Big Ben Rothwell claims to be “dead serious” about this challenge to Woodley and Bisping, this Tweet is obviously in jest. Clearly, however, he is tired of champions holding up their divisions with breaks from competition and super fights in other weight classes.

When we last saw Rothwell in action, he gave up a decision to former champion Junior Dos Santos. Though he was briefly scheduled for an August scrap with Fabricio Werdum, that fight unfortunately fell through, and he has not been rescheduled since.

Do you understand the frustration of Ben Rothwell? Sound off, PENN Nation!