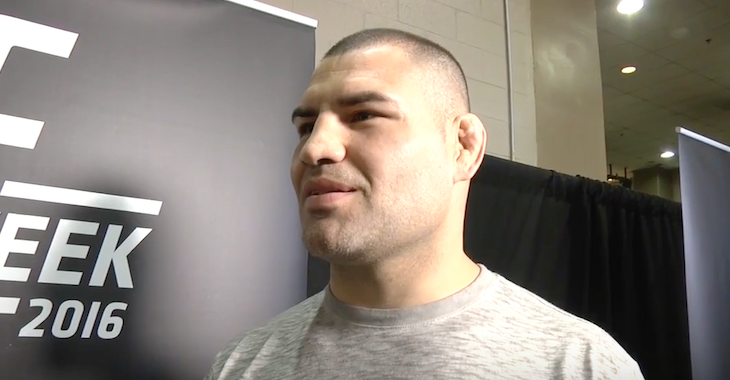 Late last month, former UFC heavyweight champ Cain Velasquez was forced out of a planned rematch with Fabricio Werdum with a back injury. Velasquez has now undergone a successful surgery to correct that injury.

“He had successful surgery on Wednesday,” Mendez told Helwani. “It was a minor surgery so he was walking right away. Only thing he has to do is wait until the incision heals before he can start working out. (It’ll take) about one month or less for the cut to heal.”

While Velasquez’s injury was severe enough to warrant a surgery, he apparently had every intention to fight through it. Unfortunately, the Nevada State Athletic Commission (NSAC) considered the former champ unfit to fight, and forced him out of his planned rematch with Werdum.

The Commission explained the decision to pull Velasquez from the card in a statement acquired by ESPN.

“Based on medical records, interviews and the best judgment of Chairman Anthony Marnell, attorney general J. Brin Gibson, the executive director’s office and our physicians, in an effort to protect the health and safety of the athletes, it’s been determined Cain Velasquez is unfit to fight. The financial incentive for fighters to compete is strongly compelling, and it is the responsibility and obligation of this commission to intervene when excessive risks are evident. It’s obvious Mr. Velasquez is physically compromised and competing would place him in significant physical risk.”

As Mendez explains, it will take a month or so for Velasquez to return to training. Here’s hoping that once the former champ does return to the gym, he’s able to fight on, free of the kinds of injuries that have marred his otherwise legendary career.

Do you think Cain Velasquez can ever reclaim the UFC heavyweight title? Sound off, PENN Nation!