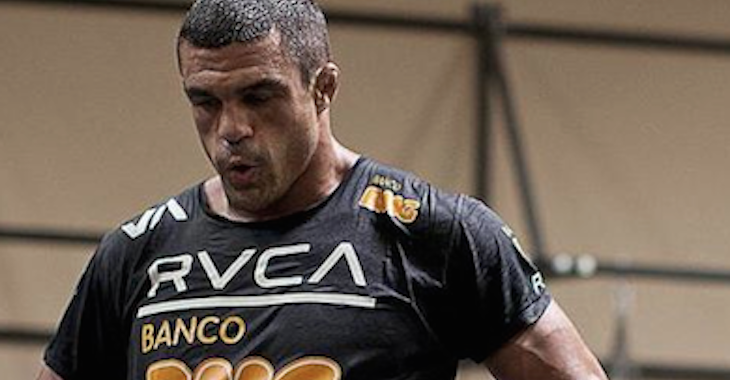 With just 24 hours until former UFC middleweight champion Vitor Belfort needs to hit the scales for his middleweight scrap with Gegard Mousasi, ‘The Phenom’ is reportedly struggling with his weight cut.

While there has been no word yet as to what Belfort is currently weighing, the situation is bad enough that the UFC has gone as far as to cancel several interviews that Belfort had scheduled, including several with ESPN affiliates.

UFC cancelled a string of Belfort's interviews, including ESPN affiliates. The word is he's not having the best of weight cuts. #UFC204 For Belfort, he will be looking to make an impressive return to the Octagon after his UFC 198 TKO loss to Jacare Souza earlier this year. Once considered one of the most dominant middleweights on the planet, Belfort has been on a bit of a slide lately. After dropping a TKO loss to Chris Weidman in the co-main event of UFC 187, where the pair fought for Weidman’s middleweight title, Belfort managed to bounce back and pick up a TKO win over Dan Henderson. Unfortunately for the MMA veteran, he was unable to build on the win over Henderson, and was TKOd by Jacare Souza in his next fight.

Mousasi on the other hand will be stepping into the bout on a 2-fight win streak that has seen him bounce back from his highlight reel KO loss to Uriah Hall nearly a year ago. Since then, Mousasi has defeated Thales Leites via unanimous decision, and most recently knocked out Thiago Santos on the UFC 200 prelims back in July.

Stay tuned for updates regarding Belfort’s weight cut as they become available!