Moraes (23-8-1 MMA), a former UFC title challenger, will enter tonight’s contest looking to rebound, this after dropping his past two fights. ‘Magic’ has gone just 1-3 over his past four Octagon appearances, with his lone win in that time coming over Jose Aldo by split decision.

Meanwhile, Merab Dvalishvili (13-4 MMA) is currently riding a six-fight winning streak, with all six of those victorious coming by way of decision. The Georgian outpointed Cody Stamann in his most previous effort this past May. 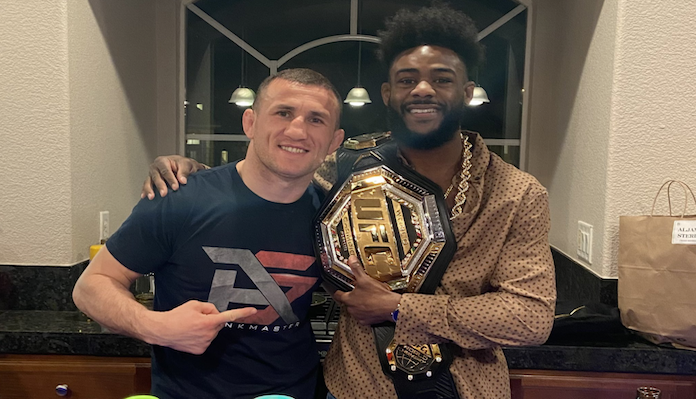 Round one of this UFC 266 bantamweight scrap begins and both men are looking to get things started quickly. Marlon Moraes is landing big shots early. Merab Dvalishvili dives for a takedown but the former title challenger defends. ‘Magic’ with a big left. Merab is hurt. Moraes rushes in and cracks him with a plethora of big shots. Somehow Dvalishvili survives. He staggers out of range and then shoots in and scores a takedown. Wow. He has one minute to work and is currently in full guard. He begins unloading huge ground and pound. Moraes is saved by the bell.

Round two of the UFC 266 featured prelim begins and Merab Dvalishvili lands a big right hand that drops Marlon Moraes. He immediately takes top position and begins raining down huge punches and elbows. This is getting ugly quickly. Dvalishvili has apparently landed over sixty strikes since ‘Magic’ landed his last. This is just a mauling now. Moraes is told be the referee he has to move. He does and scrambles into top position. That advantage is short-lived as Dvalishvili regains top control and unloads punches until the referee is forced to step in.

Who would you like to see Dvalishvili fight next following his TKO victory over Moraes at tonight’s event in Las Vegas? Share your thoughts in the comment section PENN Nation!

This article appeared first on BJPENN.COM
Previous articleVideo | Nick Diaz arrives at UFC 266 to find Georges St-Pierre in his locker room
Next articlePetr Yan reacts after Aljamain Sterling pulls out of slated rematch at UFC 267, responds to challenge from Sean O’Malley
© Newspaper WordPress Theme by TagDiv