Nick Diaz arrived at T-Mobile Arena this evening to discover he was sharing a locker room with former opponent Georges St-Pierre.

Diaz (26-9 MMA) and St-Pierre (26-2 MMA) collided for the UFC welterweight title back at UFC 158 in March of 2013, with ‘GSP’ ultimately outpointing the Stockton native on route to a unanimous decision victory.

Nick Diaz will return to action for the first time in six years this evening. The MMA icon is set to rematch Robbie Lawler in a middleweight bout on the UFC 266 main card.

St-Pierre had recently expressed his desire to see Nick Diaz succeed in his return:

“Would he come back as good as he was, or this layoff will have a negative impact on him? I don’t know. I just hope that he will come back as good as he (was) because I’m afraid that he left a lot of money on the table, and I hope I’m wrong, and I hope he comes back even better than he was and he goes for a shot for the title. I’m a huge fan. I really enjoy watching him fight.” 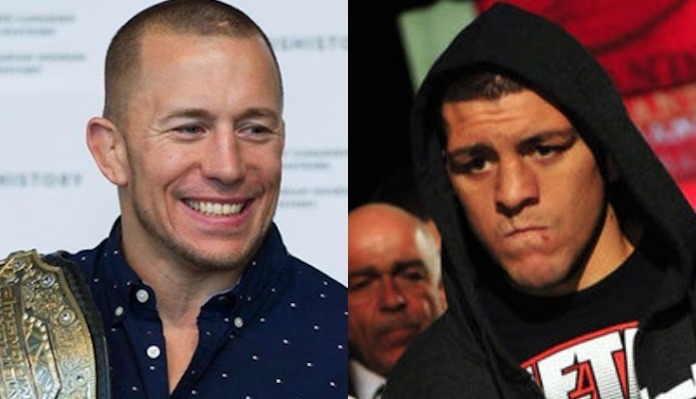 Upon arriving to the arena, Nick Diaz was filmed walking into his locker room where he discovered that he was sharing the space with his former rival in Georges St-Pierre.

The pair were nothing but respectful despite their storied past. Check out the video of Diaz and St-Pierre meeting up at UFC 266 below courtesy of Jed I Goodman on Twitter.

Nick Diaz and Robbie Lawler originally collided seventeen years ago in a welterweight bout at UFC 47, with the Stockton native emerging victorious by way of second round knockout. This time around Diaz and Lawler will compete at middleweight.

Do you think Diaz will be able to get the best of Lawler for a second time this evening?