Alex Volkanovski knows he’s dealing with a formidable team ahead of his UFC Lightweight title clash with Islam Makhachev at UFC 284 in Perth.

Just like his mentor Khabib Nurmagomedov, the Dagestani is famed for his wrestling. The AKA fighter’s overwhelming top pressure has seen him rack up a remarkable 11-fight winning streak with five straight finishes in his last five fights.

Volkanovski’s own winning streak is even more impressive. The Australian has won 23 fights on the bounce and sits atop the UFC’s Pound-for-pound rankings. He got there by being one of the most astute and well-rounded fighters in the game. Now, with a chance at winning a second UFC world title, the king of 145 lb is expecting a smart game plan from Makhachev and his team.

“He’s (Makhachev’s) definitely gonna mix it up… They’re not a silly camp. Even when they are striking, they’re very defensive, aware and their approach is always for their game,” said Volkanovski on Michael Bisping’s Believe You Me Podcast.

“You won’t see like, crazy kickboxing striking, but everything’s calculated and the way they approach everything, it’s pretty defensive. There’s always a safe net and a way to work their shots from there or clinching and things like that,” continued the form rigby league player before adding, “They don’t take unnecessary risks on the feet… But again, you know, I’m pretty clever on the feet and I’m not the type to just stand in front of someone. So obviously, they’re gonna be aware of that.”

Volkanovski has built an impressive legacy already. The 34-year-old has dominated at featherweight and is arguably the best to ever do it in that weight class having beaten fellow goats like Jose Aldo and Max Holloway. But having competed all the up at welterweight earlier in his career, Volkanovski has had his eye on a move up to lightweight for a while.

The tests don’t come much bigger than Makhachev. The Russian looked dominant when he took the belt from Charles Oliveira – a man who’d been destroying all comers for several years prior.

Volkanovski famously weighed up to 214 lb when he played rugby. Having been so imperious at featherweight, it will be intriguing to see what kind of a force he is jumping up a division.

Do you think Volkanovski gets it done against Makhachev? 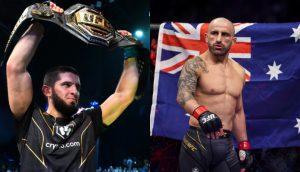 This article appeared first on BJPENN.COM
Previous articleConor McGregor reacts to KSI threatening to do “serious damage” to Dillon Danis: “Brother you’re a friendly little nerd I don’t care”
Next articleDrew Dober calls for a fight with Michael Chandler: “If Conor refuses I’m ready for the violence”
© Newspaper WordPress Theme by TagDiv