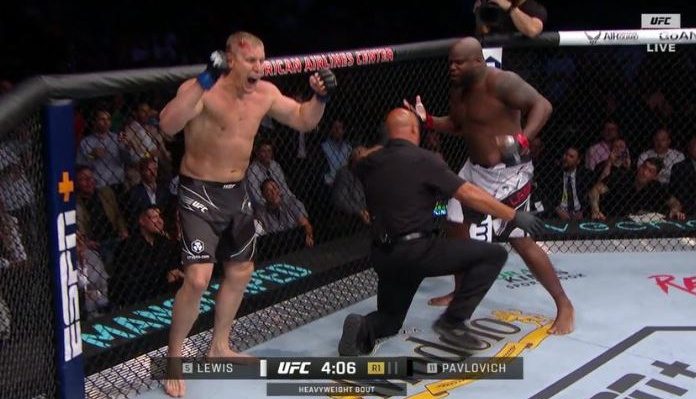 Sergei Pavlovich has defended the referee’s stoppage from his UFC 277 victory over Derrick Lewis last weekend.

Last Saturday night in Dallas, Sergei Pavlovich earned the biggest win of his mixed martial arts career so far as he finished Derrick Lewis via TKO in the first round of their heavyweight contest. Unfortunately for the Russian, the win wasn’t without controversy as Dan Miragliotta was criticized for stopping the fight too early.

Dana White agreed with the assessment but Pavlovich, who obviously benefitted from the victory, defended the ref’s decision during his post-fight press conference.

“The referee is a pro, and I think he did his job, and he did his job well,” Pavlovich said. “I don’t have any questions about the stoppage. I think it was a good stoppage.”

“Yeah, I saw it in his eyes that he was losing it, that he was going away a little bit, so I knew that I had to press on and finish it right there.”

In terms of when he wants to return, Pavlovich wouldn’t be opposed to a break.

In terms of running it back, it doesn’t feel like that’s the direction the promotion will head down anytime soon.

What are your thoughts on the stoppage in the fight between Sergei Pavlovich and Derrick Lewis? Would you like to see them run it back in the future or do you want them to move on to pastures new? Let us know your thoughts!