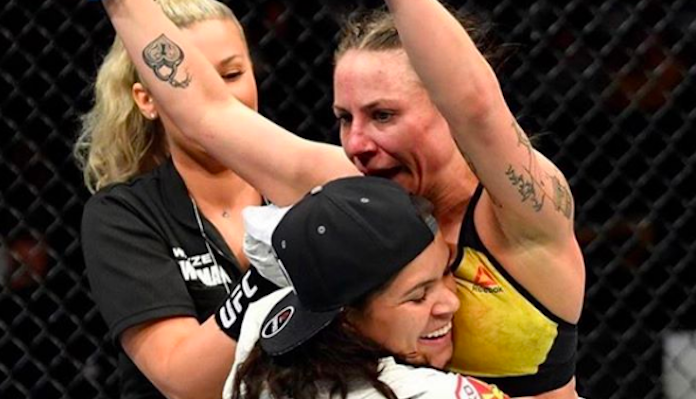 UFC women’s strawweight contender Nina Ansaroff has announced her return to the Octagon three months after having a child with Amanda Nunes.

Ansaroff and Nunes announced back in September the birth of their first child Raegan Ann Nunes. Incredibly, just three months later and Ansaroff is already ready to get back in the cage. The No. 5 ranked women’s strawweight took to her Twitter on Friday to announce her return to the Octagon. She did not announce her opponent or a date yet, but she figures to take on a top-15 opponent at least in her first fight since 2019. Check out the good news that “The Strina” shared with her fans on her social media.

Fight news coming to you soon…. yea, you read that right.

Fight news coming to you soon…. yea, you read that right.

Ansaroff (10-6) has actually been in the UFC since 2014 and she has compiled a 4-3 overall record in the world’s top MMA promotion during that stretch. The long-time partner of Nunes, Ansaroff has notable UFC victories over Claudia Gadelha, Randa Markos, and Angela Hill during her UFC career, which has pushed her into the top-five of the women’s 115lbs weight class. In Ansaroff’s last fight at UFC 238 in June 2019, she fought to a hard-fought decision defeat to top-ranked contender Tatiana Suarez.

Ansaroff hasn’t fought in nearly two years, but at age 35 she doesn’t have time on her side and likely won’t be given a tune-up fight. It will more-than-likely be Ansaroff being thrown into the fire. Looking at the current top-15, some of the fights that make sense for her include a bout against No. 2 contender Joanna Jedrzejczyk, No. 3 contender Yan Xiaonan, and No. 4 contender Carla Esparza if she doesn’t fight Weili Zhang for the belt. Those are all tough fights, but they are the fights on Ansaroff’s path to the title.

Who do you want Nina Ansaroff to fight in her return to the Octagon?