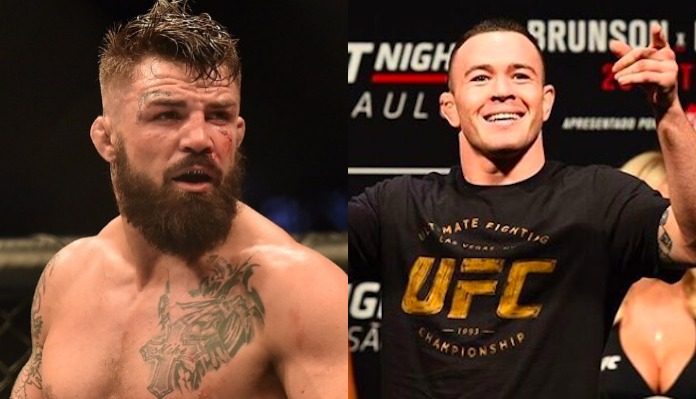 Mike Perry is looking to make fight week a difficult one for Colby Covington at UFC 245.

The two will both fight on the card, and Perry has made it clear that he hopes Kamaru Usman beats Colby Covington in the evenings main event. He has also issued a threat to ‘Chaos’ saying if he sees him, it’s on sight.

“Sure, I like Usman. I’m going to give Covington a problem all week long,” Perry said on Ariel Helwani’s MMA Show. “Let’s see if he is thinking about the right things when he gets in the ring. I hope he hears about this. If he catches sight of me, it’s on sight.”

Although he says it will be on sight, Mike Perry says he won’t go chasing after the fight. Instead, he sees him, he may go up to him.

“I won’t be looking for him, I’ll be looking to do my own thing,” he added. “If I catch a glimpse, I might sneak over.”

Of course, Perry and Covington have had multiple feuds online and interviews. They have been trash-talking one another for a while now, and Perry is ready to do something about it at UFC 245.

As for why they started trash-talking each other, Perry believes Covington said things about his wife in an attempt to get some fans.

“I don’t know why people got problems with us. Maybe he is just looking for clout because he can’t get none with that crotch sniffing style,” he said.

At UFC 245, Mike Perry is returning to the Octagon to take on Geoff Neal. It is a very interesting fight as Perry is looking to get back into the win column after a loss to Vicente Luque in August where he suffered a broken his nose.

Colby Covington is fighting for the welterweight title against Kamara Usman in the UFC 245 event headliner, but he may also have to deal with ‘Platinum’ during the week if the two run into each other.

What do you make of Mike Perry saying it’s on sight if he sees Colby Covington at UFC 245? Sound off in the comment section, PENN Nation!