Derrick Lewis was looking to snap his two-fight losing streak at UFC 244 on Saturday. There, he was taking on Blagoy Ivanov in a very critical heavyweight fight.

In the end, it was Lewis who got the split-decision win. Yet, if he was a judge, he would have awarded the win to Ivanov.

Lewis believes he lost two rounds to one and the main reason was because of the takedowns. In the fight, Ivanov completed three of his six takedowns and even had a submission attempt that appeared to be tight.

For Lewis, he thought that was the difference-maker even though Ivanov didn’t accomplish much on the ground.

“Yeah, just because of the takedowns, that is about it. I was surprised, too. I thought for sure he was going to throw more elbows and try to ground and pound me out right then and there,” he explained. “But, he didn’t so I was like okay, keep doing that and I’ll catch my breath.”

Lewis believed it was a good showing, but knows he could have done more and made it a much more decisive win. 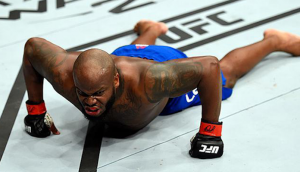 “I also could have done a lot more than I did,” he said. “I should have been more active instead of being so hesitant to throw a punch and a kick.”

Although he doesn’t believe he got the win the judges said otherwise. So, with the win, he improved to 22-7 with one no-contest and is still ranked in the top-five. The win should also set up “The Black Beast” to fight another top-ranked opponent and work his way back up to a title shot.

Blagoy Ivanov meanwhile, is now 2-2 in the UFC with the loss. He also dropped two spots in the rankings and is now ranked 10th. If he had won the fight, he would have been put in the top-five and could have very well been one fight away from a title shot.

What do you make of Derrick Lewis saying he lost his fight against Blagoy Ivanov? Sound off in the comment section, PENN Nation!