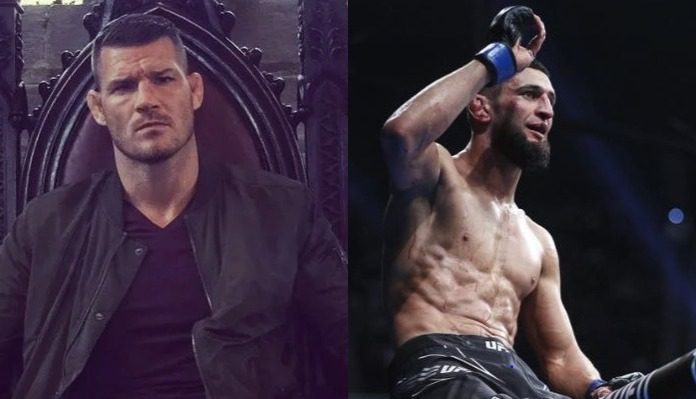 The Stockton-native has been very vocal about his want to leave the UFC. Diaz last competed against Leon Edwards at UFC 263 last June. The bout saw him lose via unanimous decision, however, not before nearly finishing his foe in the last round.

Since that defeat, the fan favorite has been offering to fight anyone to finish his contract. It seems that the UFC took those sentiments to heart, as they scheduled him for a showdown with Khamzat Chimaev. The two stars are set to headline UFC 279 in September.

The bout was almost universally bashed on social media due to the lack of competitiveness. Oddsmakers agreed and listed ‘Borz’ as an astronomical favorite over Diaz. It seems that Michael Bisping would agree the fight isn’t that interesting.

‘The Count’ discussed the matchup in an interview with Barstool Sports. Upon being asked if he was most excited about the bout in comparison to other recent fight announcements, Bisping responded in the negative.

The former middleweight titleholder opined that Chimaev will run through Diaz in September. However, he also credited the latter as very tough and praised his heart.

“Which one intrigues me the most? It isn’t Khamzat and Nate Diaz, that doesn’t intrigue me. You know why? He’s going to run over him. Listen, Diaz is tough as they come, you know what I mean? Don’t take what I said as insulting to Diaz. He’s very tough, he’s very game, he always comes in shape, he never gives up. He was getting outclassed by Leon Edwards for five rounds, did he almost finish him in the fifth round? Yes, he did.”

Michael Bisping continued, “…But, Khamzat is a bigger, scarier dude. Diaz has struggled at 170, he’s a natural 155er, let’s be honest. You never know, nothing is given in this sport. If you take someone lightly, if you take anything for granted, it could comeback to bite you in the a*s.”