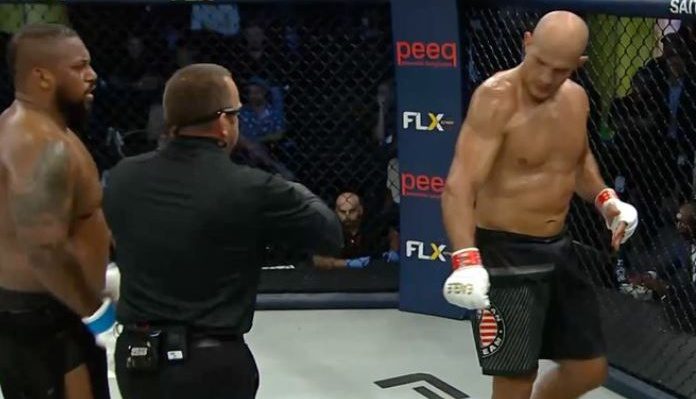 Junior dos Santos has provided fans with an update following the shoulder injury he picked up at Eagle FC 47.

Last weekend at Eagle FC 47, Junior dos Santos went toe to toe with Yorgan De Castro in what proved to be a really fun main event down in Miami. Both heavyweights were slugging it out for the first two rounds and enjoyed similar levels of success, with many believing dos Santos looked the best he has done in years.

Alas, the fight was brought to an abrupt end after JDS went down with a shoulder injury that brought a stop to the contest with just 35 seconds gone in the third round.

Now, the 38-year-old has released the following statement updating fans on his condition and what the future holds.

“Hey guys, I’m home already. I took my shower, had my dinner, I’m ready to get some rest now. My shoulder is back to place in this position, like this. I’m not feeling any pain. I went to talk to my doctor and we’re gonna do some exams, figure out what’s going to be the procedure to get this thing better as soon as possible. But, before going to bed, I would like to share with you guys that I was feeling so happy. I was feeling very good during the fight, like I haven’t felt in a long, long time. So, it was good. It was good, because I was able to deliver everything what I worked for. The hard work we put in the gym, I was able to bring to the octagon. Things were working good for us until we had this injury.”

Do you think Junior dos Santos will be able to return and earn a victory in Eagle FC after this unfortunate setback? What did you think of his performance?