The Missouri native had a successful run in the promotion from 2013 to 2020. During that stretch, Krause faced and defeated some names such as Sam Stout, Jamie Varner, Warley Alves, and more.

In 2020, the welterweight contender fought for the final time, defeating Claudio Silva by decision. Two years later on The MMA Hour, Krause announced his retirement. His decision wasn’t spurred on by a losing streak, or fading interest in the sport, however.

Instead, James Krause retired to turn his full attention and focus to coaching. The head of Glory MMA in Kansas City, he coached Brandon Moreno to interim flyweight gold last year. Beyond that, he’s also coached names such as Megan Anderson, and Jeff Molina. 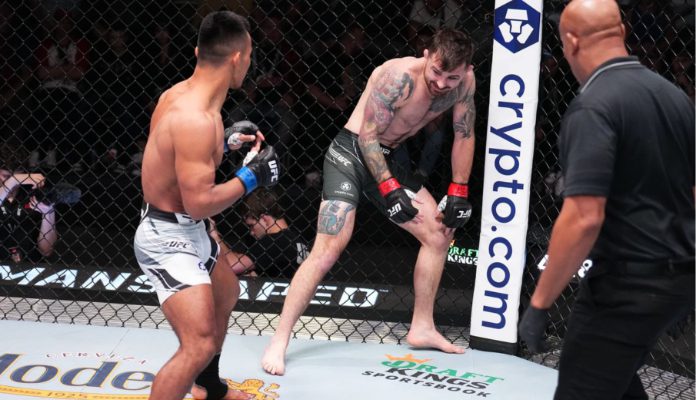 However, late last year, the former fighter was suspended due to a fight involving one of his students, Darrick Minner. In November, he was defeated by first-round stoppage by Shayilan Neurdanbieke. Hours prior to the fight, the odds swung heavily toward the eventual victor.

That, combined with Minner reportedly fighting with an injury, led both men to be suspended by the Nevada Athletic Commission and investigated by the FBI. Furthermore, the UFC notified fighters being coached by Krause that if they continued to do so, they wouldn’t be able to fight in the promotion.

Since that time, there’s been little information regarding the ongoing case involving James Krause. Well, until now. ESPN was the first to report that the coach had been working as an agent for ABCBetting.ag since 2019. The .ag domain is for websites in Antigua and Barbuda.

For the uninitiated, an agent in the world of betting is the term for a middleman between offshore sportsbooks, and bettors. According to sources close to Krause, he would routinely provide individuals with a line of credit and login information on the site. They placed their wagers on the site, as well as paid Krause directly.

It’s worth noting U.S. residents who have worked as agents for offshore sportsbooks have previously been charged with a litany of crimes. Those crimes are tax evasion, operating an illegal sports betting organization, and money laundering. Furthermore, The Department of Justice has previously accused offshore sportsbooks that serve U.S. bettors of violating The Wire Act.

This article appeared first on BJPENN.COM
Previous articleCharles Jourdain slams YouTube boxer Faze Temper for stating UFC fighters are being “robbed”: “We don’t want you clowns to “help” us”
Next articleSean Strickland doesn’t think too highly of Nassourdine Imavov: “Only thing the French are good at is having affairs and giving up and losing fights”
© Newspaper WordPress Theme by TagDiv