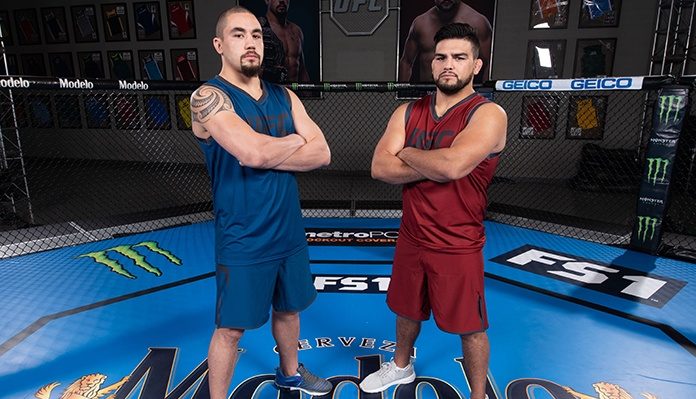 When fighters get the call to say they are competing on The Ultimate Fighter (TUF) it is a dream come true. The news means they are just three victories away from earning a UFC contract, while even the fighters that don’t win sometimes end up in the UFC.

However, when fighters compete on The Ultimate Fighter, they are locked away in a house together with the other competitors. It can cause some awkward moments and has even resulted in scraps breaking out inside the house. TUF 28 fighters, Leah Letson and Maurice Greene now know all to well what the infamous TUF house is like.

“I’m gonna be honest with you. I thought I was going to go out there and have a good time, train hard and it would just be fun,” said Greene about what the TUF house is like. “I didn’t expect some of the ups and downs that I went through in the house and just being so homesick at a certain point. It is a pressure cooker, you got all these guys and girls in the house and you know you have to fight each other.

“That is okay with me, but some guys act funny and they do certain things that rub you the wrong way. You don’t have much to do,” Greene continued. “It’s not like I can go listen to music or go and read a book unless you read the bible or some sort of religious book you don’t get a book in the house. It’s just a pressure cooker and that can create conflict.”

It is indeed a pressure cooker to create conflict. For Letson, she wasn’t trying to start conflicts, and instead attempted to get along with everybody. With that said, The Ultimate Fighter house did provide some awkward moments for her.

“It is a little awkward at first but after a week or so you kind of get used to it, and it becomes a fact of life, like yeah, I could fight these people. As soon as you step in the ring it is all business,” said Letson. After that, you can be friends with your potential opponents. It was something I have never experienced before. I usually never talk to my opponents or even acknowledge their existence before a fight, but you don’t really have that choice in the house. It is a little weird.

“It’s interesting to see how people handle themselves in those situations. You are on camera 24/7, you are training, you are gonna fight, you have to make weight and you don’t have your normal living situations or coaches, or family or friends there to support you. A lot of people mentally break,” Letson continued. “For me, it wasn’t nearly as bad as it was for others because I have the military experience, I was deployed. It was similar to that. For me, it didn’t bother me that much, but it did get to some people.”

While competing on TUF was hard both mentally and physically. Something that goes unnoticed on the show is how the fighters spend most of their days. They are at the gym for the most part, but once they head back to the house, finding something to do is hard. The fighters are cut off from the outside world with no access to T.V., radio, cell phones, books — except for religious books — and anything else people use in their everyday lives. All they have is what the UFC gave them, and it gets boring very fast inside the house.

“We were so bored, a lot. We have a pool, a ping pong table and a pool table. For me, I wrote in a journal just talking and hanging out to pass the time. Taking naps sometimes,” Letson said. “I worked out three times a day outside of the actual training, so that helped me stay busy. Other than that it, it is basically just sitting around talking about things about home and getting to know all the other fighters pretty well. I had my bible with me so I read that sometimes, that’s pretty much it.”

Meanwhile, for Greene, it became a challenge for him. He turned to alcohol and cigarettes inside the house, something he wishes he didn’t do. But for him, the boredom was just too much and needed something to keep himself busy.

“I did lose my mind in there. So, I smoke cigarettes, right. I told myself that I would quit smoking when I’m in the TUF house. We see how that went over,” said Greene. “With the lack of nicotine and a fully stocked bar, I drank at night and had a good time, especially after my fight I had a good amount of time until my semi-finals fight. I had a bit of fun but I had some conflicts in the house.

“My other way to pass time in the house was half of my suitcase was yarn. I brought the crochet hooks,” Greene added. “You can only crochet so many times in the house until it gets old. We had a pool there, we had yard games. Hopefully they show you something that happened in the house, but I can’t speak about it, but if they do you will see how we passed time in the TUF house.”

While Letson and Greene found themselves bored inside the house, Justin Frazier was on the other end of the spectrum. Frazier, who is fighting in the finale, made up games, cooked and did all sorts of other things to stay busy inside the house.

“We had a swimming pool and a hot tub. We had eight guys and eight girls. There is plenty of social interaction. We did a lot of group cooking,” said Frazier. “I smoked something almost every day in a smoker. Whether it be tuna, salmon or chicken wings or ribs. Or whether we were making guacamole for lunch, we had taco night, we played cornhole, trash-basketball, trashcan frisbee. We trained at home quite a bit, cause we would bring our s**t home. Our team bonded as a family more so than the other team. We were always doing something together anyways to pass time.”

Ultimately, keeping busy in The Ultimate Fighter (TUF) house is harder said than done. One thing is for sure, the TUF house is a hard place to live.