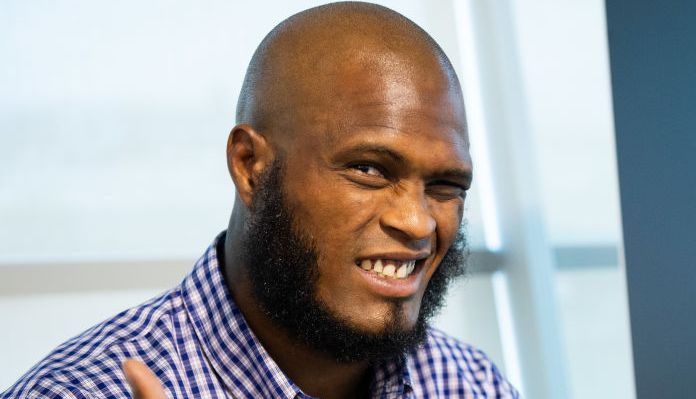 Currently, The Ultimate Fighter (TUF) is in season 28, where heavyweights and women featherweights are competing. The coaches for the season are Kelvin Gastelum and Robert Whittaker. However, one of the more popular people on the show isn’t a coach, rather a competitor, in Maurice Greene.

Greene had an unconventional path to MMA. He used to be over 300 pounds and never trained a day of MMA in his life until he decided he wanted to. Since then, Greene lost a lot of weight, and quit his full-time job in hopes of fighting for the UFC. Well, he appears to be close after getting a call to go on TUF.

“Without sounding super cocky or whatever, I kind of felt like I made it to the house,” said Greene in a recent phone interview with Cole Shelton of BJPENN.com. “I think I made a big enough impression at tryouts to be in the house. To get the final call you never really know until they book those tickets and you are on the airplane. It is kind of surreal, it is a surreal experience.

“Like I told Justin (Frazier), he is one of my best friends in the house and I still talk to him to this day. I told Justin when (UFC President) Dana (White) walked out there and said ‘this is the toughest thing you will go through’ I kind of laughed it off like it was a joke. We get whatever we want. It is a hell of an experience. That is why a lot of people come off TUF and a good portion of them are successful in the UFC whether they win or not because of that experience.”

Also, since being on TUF, Greene learned a lot about himself. After watching the show, Greene now knows that he was being portrayed as a bad person and an alcoholic. He claims to be neither of those things, and credits the TUF experience for making him a better fighter.

“From a mental aspect, you can be a good fighter but if you aren’t mentally strong, s**t just don’t work out. You will break down in fights,” said Greene. “I got mentally stronger and I am starting to hone in on my talent. I got into the game really late. A lot of these guys come from a wrestling background or doing kickboxing or whatever, I started at 24 or 25, at 330 pounds, never doing martial arts in my life, never less fighting.

“I didn’t grow up fighting as some of these other guys, I didn’t even like fighting. I’m successful seven years later. Some people work their whole lives to get here. I’m one of the lucky ones. I have a lot of potential, the TUF house made me that much better. You get world-class coaches, world-class training, the only downfall is that you are under that microscope of reality television at times.”

A big reason why Greene believes he got better is because of his head coach in Kelvin Gastelum. “KG” brought in UFC fighters and different coaches to help train the TUF 28 competitors. Along with that, Gastelum had a good bond with his team and they always enjoyed training because of it.

“Kelvin Gastelum, his whole staff was awesome. Anything we needed they were there,” said Greene. “Even the days we didn’t have practice we just had one gym and our team showed up, they didn’t have to show up but they showed up. All of them showed up and let us do what we wanted to do. It was just a good vibe. Kelvin Gastelum gave a f**k about what he was doing, I feel like. He tried to give us new tools, he brought in several people. I’m coming off the show as a better fighter, I feel like I was on the better team. I am very happy with the time I spent in the TUF house.”

Ultimately, Greene entered the season as a very good standup fighter, evident in his fights with Glory Kickboxing. He was deemed to have poor wrestling and ground game, something Greene knew he had to work on. With the help of the TUF coaches, he believes it has gotten better and can’t wait to show it.

“I mean there is no underestimation and I’ll say it proudly my wrestling is the weakest part of my game. My jiu-jitsu isn’t, right. I can do jiu-jitsu, I love doing jiu-jitsu. I do a lot of jiu-jitsu,” he said. “To transition from the takedown to takedown defence, it has always been tough for me being tall in the heavyweight division. You fight a lot of wrestlers in the heavyweight division and a lot of them want to take you down and make a boring fight out of it.

Nonetheless, no matter the outcome of how the rest of the season portrays, Greene showed the world just how good of a fighter he is. Ultimately, being on TUF helped him become a better fighter, but whether or not he would do it again, Greene is quick to answer.

Greene became a fan favorite on the show and may see himself in the UFC sooner rather than later.

Check back on Monday to read Greene talk about his biggest rival in the house Juan Espino, and how that rivalry started.