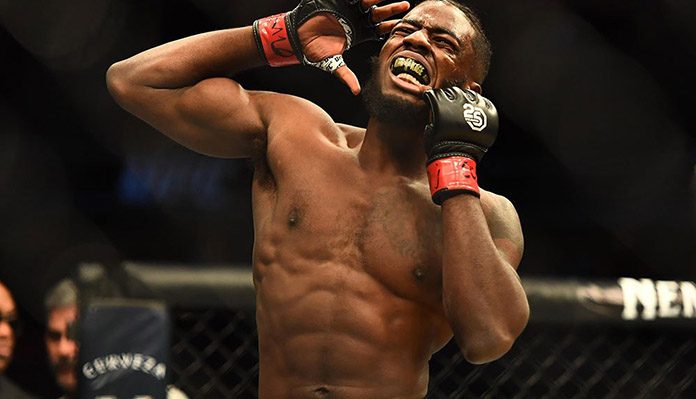 Lightweight Devonte Smith revealed that his celebration plans after his big win at UFC Vegas 18 are to “get blazed, chill, and play UFC.”

Smith was making his comeback to the Octagon after over a year away from the cage following a shocking upset KO loss to Khama Worthy at UFC 241 in August 2019. Not long after losing that fight, Smith suffered a tear to his Achilles tendon in training and he’s been on the shelf ever since. To make matters worse, Smith dealt with a personal tragedy as his sister was shot and killed in July 2020. But the 27-year-old Ohio native persevered through all of it and managed to make it back to the Octagon on Saturday.

In an excellent performance from start-to-finish, Smith was able to batter opponent Justin Jaynes on the feet and on the mat en route to a second-round TKO victory due to doctor stoppage after Jaynes’ eye was busted up. With the win, Smith improved to 11-2 as a pro with a 3-1 UFC record. Following the fight, he was asked by reporters at the post-fight press conference what his upcoming plans are. The lightweight said he wants to take a month off and then elaborated further on what he plans on doing.

“Shh. You really asked? Shh. What do I do? One, I’m about to, shh. Nah, they about to be mad if I say that. Otherwise, a lot of anime, spend a lot of time with family, that’s the most important, getting blazed and chill, really relax, and play UFC while I’m chilling,” Smith said.

You have to love Smith’s honesty. The UFC lightweight contender will likely aim to get back in the Octagon later this spring or perhaps in the summer, but right now he just wants to take a break and you have to respect that. After a long time away from the sport and considering all he’s dealt with, he no doubt deserves the time to just relax.

Who do you want to see Devonte Smith fight next?