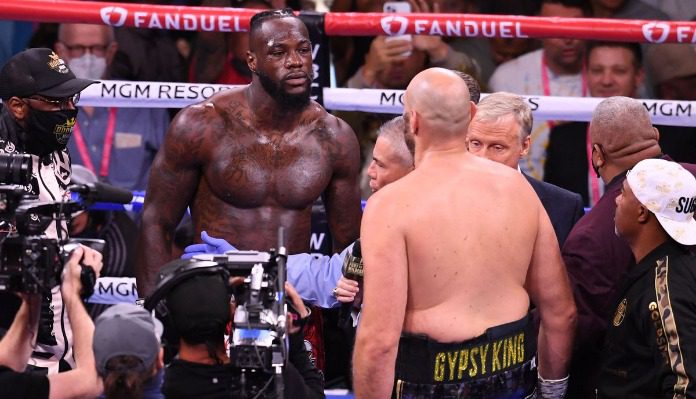 A new video has been released showing Tyson Fury trying to talk to Deontay Wilder after their third fight.

Last Saturday in Las Vegas, Fury and Wilder had their highly-anticipated trilogy. It was an intriguing fight and it exceeded expectations as both men went toe-to-toe as they each dropped each other a few times. But, in the end, it was Fury who got the 11th-round KO win over Wilder.

After the fight, Fury tried to go to Wilder’s corner to say something but quickly walked away. When he was interviewed in the ring, he said Wilder has no love for him and is a sore loser.

“I’m not going to make any excuses, Wilder is a top fighter,” Fury said in the ring. “He gave me a real run for my money tonight, and I always said I’m the best in the world and he’s the second-best. He’s got no love for me, Deontay Wilder, because you know why, because I beat him three times. I’m a sportsman. I went over to him to show some love and respect and he didn’t want to give it back. That’s his problem.”

Now, Top Rank boxing released the footage from after the fight which shows Tyson Fury going to say something to Deontay Wilder. In the footage, Fury tries to pay his respect but Wilder quickly shuts him down.

“Never mind love, there’s respect” Fury responded. “You got beat fair and square tonight, that’s it, I respect you.”

“I don’t respect you,” Wilder said.

Fury then went to Wilder’s corner to try and talk to them where he made it clear it was a great fight and he never cheated despite the accusation.

“Listen, I never cheated in my life, I played fair and square. He’s got bad hatred towards me and I don’t know why, but let me tell you, he lost like a man tonight, he put me down three times I put him down four. Great heavyweight fight,” Fury said.

Fury no doubt has a point as to him calling Wilder a sore loser after this exchange. However, the two are rivals and it was a disappointing loss for “The Bronze Bomber” as he later did pay his respects on Instagram.

What do you make of this exchange between Tyson Fury and Deontay Wilder?