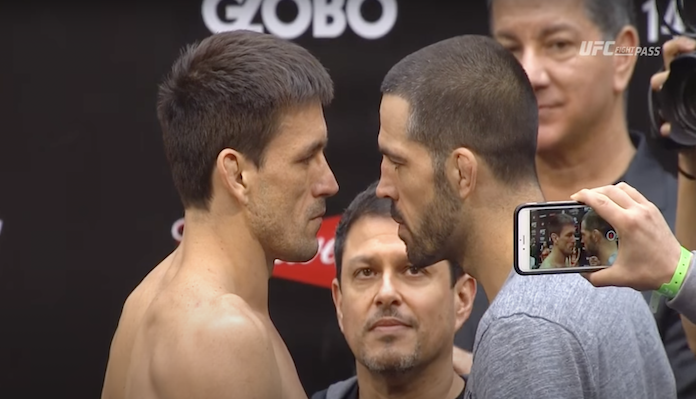 The 43-year-old Maia recently lost a unanimous decision to Belal Muhammad at UFC 263 and following the fight, UFC president Dana White hinted that could be the last time we see the legendary Brazilian inside the Octagon as Maia is one of the oldest fighters in the UFC and is on a two-fight losing skid. However, Maia has said that he wants to fight one more time before he hangs up his gloves for good, and he called out Nate Diaz for his final fight.

Another fighter who called out Diaz is Brown, who recently knocked out Dhiego Lima at UFC Vegas 29 to snap a two-fight losing skid and bounce back into the win column. Brown said that he would be open to fighting either Diaz brother or potentially have rematches against Donald Cerrone, Robbie Lawler, or Maia for the final fight of his career. Maia and Brown previously met at UFC 198 and Maia won in the third-round by rear-naked choke. Five years later and Brown has called out Maia for the final fight of his own MMA career.

Taking to his social media to respond to Brown, Maia praised his former foe and said that the respect is mutual, though he didn’t necessarily accept Brown’s proposal for the fight.

Congrats on a great win @iamtheimmortal Matt Brown. It’s great to see other seasoned veterans doing well, and winning in decisive fashion. It’s funny because a lot of people feel limited by age, but we do know how we feel in training, how our experience comes together with the skills, and how competitive we are. But a fight is a matter of that moment, and if we don’t perform to our best at that time, it might leave others to label us. This time you did perform great, and I’m happy for you. Now, I have no idea if I’ll still fight MMA, but I also appreciate the respect and your words post fight. We will see what life brings my way, but the respect is mutual. Congratulations again and enjoy your much deserved time off.

Do you want to see the rematch between Demian Maia and Matt Brown or is there another fight you would like to see for these two men instead?