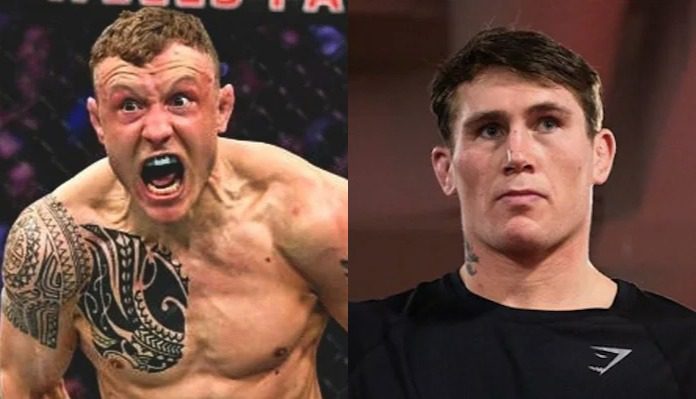 UFC middleweight contender Darren Till is officially out of UFC London.

‘The Gorilla’ was set to return later this month for the first time since his defeat to Derek Brunson last September. The loss was a derailing one, as Till hoped to secure a title shot with a victory.

UFC middleweight champion Israel Adesanya had clamored to fight the Liverpool-native in the past. However, with the loss to Brunson, Darren Till had to rebuild.  With his title hopes dashed, the Brit quickly scheduled his return for later this month at UFC London at the O2 Arena.

He was matched up with fellow contender Jack Hermansson for the July 23rd event. ‘The Joker’ is coming off a split decision loss to Sean Strickland in February. Prior to the defeat, he had won six of his last eight contests.

The fight was set to be the co-main event of a stacked UFC London card. The event is headlined by a heavyweight showdown between Curtis Blaydes and Tom Aspinall. Also set for the event is Paddy Pimblett’s return against Jordan Leavitt and Nikita Krylov vs. Alexander Gustafsson.

However, UFC London has now taken a hit. As first reported by ESPN MMA‘s Marc Raimondi, Darren Till is out of his middleweight showdown with Jack Hermansson. Raimondi reported that the fight is off due to the Brit suffering an undisclosed injury.

As of now, the severity of the injury isn’t known. Also, what is not known, is if the fight will be rescheduled, or if someone will replace Darren Till. Fans can expect an announcement of Jack Hermansson’s status on the card in the coming days.

What do you think about Darren Till’s withdrawal? Do you want to see Jack Hermansson still fight at UFC London? Sound off in the comment section below!