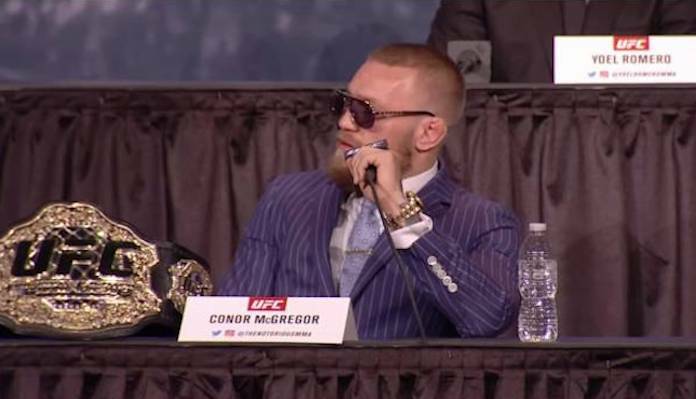 Conor McGregor has had it with Henry Cejudo’s continuous jabs on social media.

‘The Notorious’ has been out of the cage since UFC 264 in July 2021. The former two-weight champion lost his trilogy bout with Dustin Poirier via TKO after suffering a leg injury. The broken limb has forced him to be on the sidelines ever since.

However, McGregor has since been teasing a return to the Octagon. Recently, he’s been posting training videos to his social media pages. He’s also taken aim at UFC welterweight champion Kamaru Usman recently, and proclaimed they’d fight upon his return to action.

All of this ongoing drama with Conor McGregor hasn’t gone well with Henry Cejudo. He too has been on the shelf for nearly two years after retiring in May 2020. During his time gone away from the sport, he’s taken several shots at McGregor. He’s told the former champion to drop his “yes men“, among other insults.

He’s also offered to fight McGregor upon the latter’s return. That’s in spite of the fact that ‘Triple C’ has never even fought at featherweight, let alone lightweight. Meanwhile, McGregor is angling for a return at welterweight, so a fight with Cejudo makes no real sense.

Earlier this week, McGregor was arrested for a driving offense. Cejudo then took to Twitter to mock him, and tell him to slow down. ‘The Notorious’ has now responded and told his fellow former champ-champ to stop messaging him on Twitter.

Mate, I don’t give two fucks about you. You are a nobody. Who the fuck even are you? You are a little skid mark to me, stop messaging me, thanks.

What do you think about Conor McGregor and Henry Cejudo going back and forth? Would you be interested in seeing them fight?