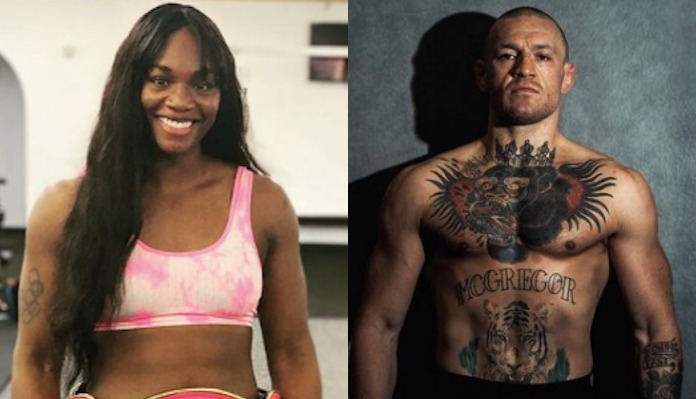 Former two-division UFC champ Conor McGregor has some words of advice for boxing star Claressa Shields, who will transition to MMA under the PFL banner in 2021.

Shields, a three-division boxing champ at just 25 years old, will make her MMA debut in the PFL cage in 2021. Ahead of that debut, Shields has been training at JacksonWink MMA alongside former UFC champs Jon Jones and Holly Holm. She’s also received some advice from another former UFC champ in McGregor.

McGregor shared some advice for Shields and her coaching staff in the replies on an Instagram post from ESPN MMA. See what he had to say below:

“Teach her balancing on the single leg first,” McGregor wrote. “Warm up / warm down for EVERY session – Pick the single leg and move her around. Elevate the leg high. Push her back with it. Lower it forward etc., etc. Get her real cozy hopping on that single leg! Improve her hamstring flexibility as well as balancing ability. Crucial going forward!

“Have her play with her punching while bouncing on the single also,” McGregor continued. “Finding the target of the temple of the person moving her leg around! Think coziness! Good luck Clarissa! Excited to see you progress!”

The details of Claressa Shields’ MMA debut have not yet been revealed, but she’s expected to step into the PFL cage sometime in the first half of 2021. When she does, it seems safe to assume McGregor will be watching.

McGregor is slated to make his own return to competition in the main event of UFC 257 on January 23, when he collides with fellow lightweight contender Dustin Poirier. The bout will be a rematch of a 2014 fight, which McGregor won by first-round knockout.

What do you think of the encouraging words Conor McGregor sent to Claressa Shields.