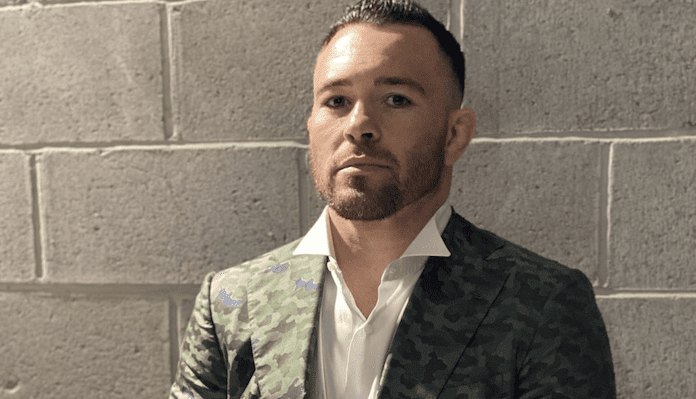 Covington was in action on March 5 as he took the headlining spot for UFC 272 against Jorge Masvidal. There was a ton of animosity going into this one and ultimately, Covington had his hand raised. After the fight, Covington took aim at Poirier (via MMAMania.com).

“I just took care of Miami street trash, now it’s time to take care of Louisiana swamp trash. Where you at Dustin Poirier, you cuck. You said it’s on sight. Name the site, Dustin. Bring that jezebel of a wife and bring that little kid and I’ll see you soon. You’re next.”

Poirier took to his Twitter account to make it clear that he’s more interested in enjoying his vacation in Jamaica than entertaining the Colby beef right now.

Covington was asked about the tweets during the UFC 272 post-fight press conference and he had the following to say (h/t MMAFighting.com).

“Let’s do it, bro. He said it’s on sight. Let’s do it. Stop talking reckless in the media. If I talk to the media and say things, I come out here and back it up. I’m a man of my word.

“So we can do it anywhere. We don’t have to do it in the UFC Octagon. If he wants to do it in a park, or in a street, my one stipulation is that you let the world watch it and enjoy themselves.”

Covington is the number one-ranked UFC welterweight but he’s in a rough spot. He’s already lost to reigning UFC Welterweight Champion Kamaru Usman twice. UFC President Dana White has said he’ll have a conversation with “Chaos” on what he wants to do next.

It seems like Covington is targeting a showdown with Poirier but “The Diamond” has insisted he’ll only fight his former American Top Team teammate on the streets.