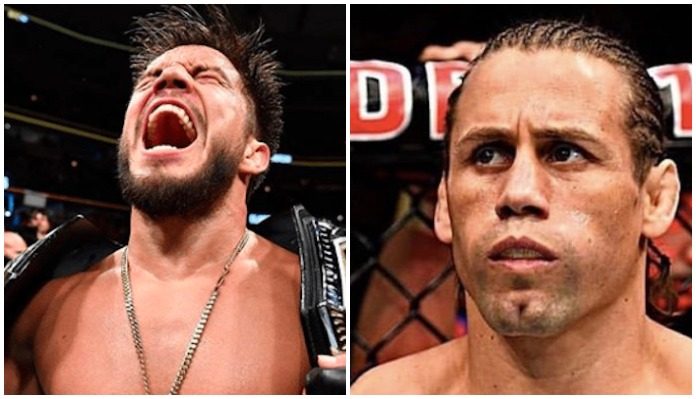 Many have dismissed the idea of Henry Cejudo vs. Urijah Faber, but Chael Sonnen isn’t one of them.

Cejudo is a UFC “champ-champ.” He holds the flyweight and bantamweight gold. After his 135-pound title win over Marlon Moraes last month, Cejudo called out the likes of Dominick Cruz, Cody Garbrandt, and Faber. “The California Kid” made a successful return following a retirement that lasted over two years. He knocked out Ricky Simon in 46 seconds.

While Cejudo and Faber have been revving up the trash talk, some fans are left with a bad taste in their mouths regarding a potential title bout between the two. Sonnen took to his YouTube channel to explain why he wouldn’t have a problem with the matchup.

“That works for me,” Sonnen said. “And I realize people are going to push back if Urijah goes right into a title shot and I’m not even predicting for you that he will. But every number of years sometimes we have to go off of the rankings. And while not making sense, it still makes sense.”

Sonnen said that Michael Bisping vs. Dan Henderson 2 is a perfect example of a fight that had to happen even though the rankings didn’t align. “The American Gangster” went on to explain how Cejudo vs. Faber can make sense.

“If you talk about Urijah vs. Cejudo, I don’t give a damn that he’s been out,” Sonnen continued. “He just beat a guy who’s been in. In this sport if you beat a guy, you take everything he did. … In conjunction if you have Cejudo saying ‘that’s who I want,’ it’s interesting. You cannot just totally deny it. You simply can’t. And I know that many of you will, that’s why I’m saying it. Just don’t forget the rule of this sport — if you beat a guy, you take whatever it is he has. If he’s got an interim championship, you take it. If he’s got the world championship, you take it. You take whatever he has. That’s the way this sport works.”

Do you agree with Chael Sonnen’s points on a potential title bout between Henry Cejudo and Urijah Faber?