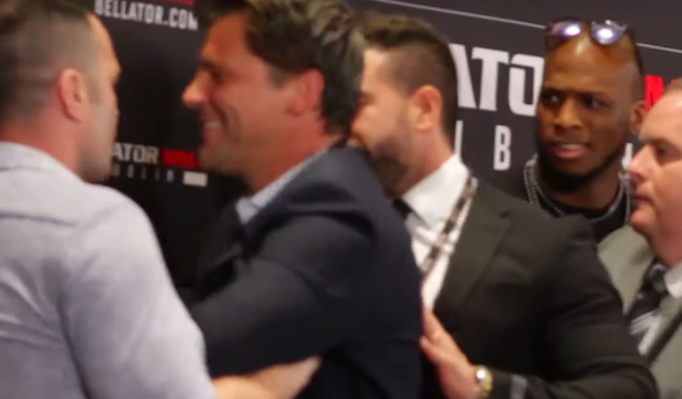 Michael Page is set to return to the cage opposite fellow striker Richard Kiely at Bellator Dublin on September 27.

This week, the two fighters — who have already developed a serious beef — appeared at the official Bellator Dublin press conference. And as is so often the case when rival fighters are smushed together on a small stage, things got heated.

The pair’s time on stage began with Michael Page looking completely disinterested, using his phone and completely ignoring his foe. Kiely, however, wasn’t having it, and took great lengths to get Page’s attention, waving his hand in Page’s face, and ultimately, taking a step in front of him on stage.

When Kiely stepped to the front of the stage, Page put his hand on his foe’s shoulder. Kiely then attempted to remove Page’ hand, turned around, and found himself on the receiving end of a hard, two-hand shove from the Brit.

The two scowling fighters were then separated by Bellator staff. See it below (video via MMA Fighting):

This bout will serve as Page’s opportunity to rebound from a highlight-reel knockout loss to former Bellator welterweight champion Douglas Lima. This loss was the first of Page’s professional mixed martial arts career, and ejected him from the Bellator Welterweight World Grand Prix. Prior to this setback, the Brit rattled of 10 victories in the Bellator cage, including triumphs over the likes of Fernando Gonzales, David Rickels and Paul Daley. He’s 14-1 overall in MMA, and has also dabbled in boxing.

Kiely, like his upcoming foe, is also a striker. He’s 3-1 in MMA competition, and has been angling for a fight with Page for some time. He was recently scheduled to fight UFC veteran Galore Bofando, but was forced out of this contest.

Who do you think will win this grudge match between Richard Kiely and Michael Page?