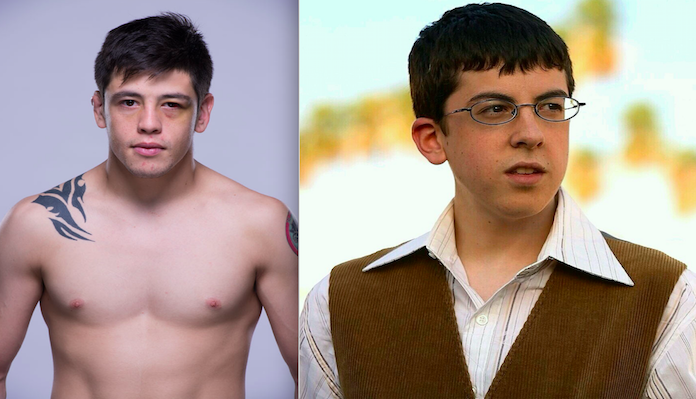 UFC flyweight contender Brandon Moreno joked that he would consider changing his nickname from “The Assassin Baby” to “Mexican McLovin.”

Moreno is currently the No. 1 ranked contender in the UFC flyweight division, and on December 12, he will take on champion Deiveson Figueiredo in the main event of UFC 256. It’s a huge opportunity for Moreno, who is one of the most exciting fighters in the division. In his last fight at UFC 255, he finished Brandon Royval in round one.

Ahead of his upcoming title fight against Figueiredo at UFC 256, Moreno spoke to TMZ Sports and one of the things he was asked was about the nickname “Mexican McLovin,” which some fans have taken fondly too. Although Moreno is currently nicknamed “The Assassin Baby,” he joked that he would be open to changing it.

“It’s fine for me. When I had my debut in the UFC, Daniel Cormier gave me that nickname. To be honest, it’s so funny. I love it,” Moreno said.

McLovin, of course, was the nickname of the famous character played by Christopher Mintz-Plasse in the epic 2007 comedy “Superbad.” The Mexican flyweight admitted that he does see the resemblance to McLovin and agreed that a nickname change could be in store one day. Moreno already has a great nickname, but maybe this one is better.

“It’s perfect. I mean, I love it. I love it. Maybe I can change the nickname. No more ‘Assassin Baby.’ Now, McLovin. ‘Mexican McLovin.’ F*ck it,” Moreno said.

The flyweight contender also said that he hopes to meet the actor Mintz-Plasse, and hinted that he could name drop him on the mic if he beats Figueiredo at UFC 256.

“Not yet, hopefully in the future. You never know,” Moreno said about meeting the real-life McLovin. “After I get the title, I need to make some statements or call him on the microphone with Joe Rogan or something. You never know.”

Would you prefer Brandon Moreno be nicknamed the “The Assassin Baby” or “Mexican McLovin”?