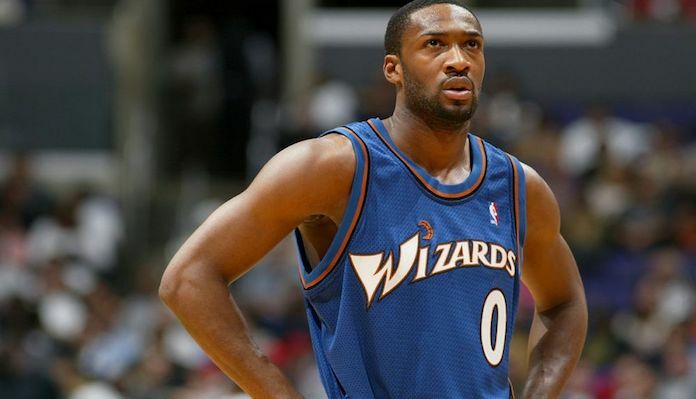 Former NBA all-star Gilbert Arenas called for Jake Paul to run back the Nate Robinson fight after he scored a nasty KO this past weekend.

Paul knocked out Robinson in absolutely devastating fashion in the co-main event of this past Saturday’s boxing match between legends Mike Tyson and Roy Jones Jr. Robinson, a former NBA dunk champion, looked completely out of place in the fight. Although he says he trained hard, once the bell rung it was clear that Robinson was completely out of his element. Paul scored two knockdowns before scoring the KO blow, which led to a number of NBA playing reacting to the finish on social media.

One of those players in Arenas, a former all-star guard for the Washington Wizards of the NBA during the mid-2000s. Arenas played in the NBA between 2001 and 2012, starring for the Wizards, Golden State Warriors, Orlando Magic, and Memphis Grizzlies before his career ended. Following the fight against Paul, Arenas took to social media to send a message of support to Robinson. He credited his former NBA rival for having the courage to step into the ring and told Paul to give him a rematch.

@naterobinson u went out there, u got knocked out and became and insist meme NOW get back in the lab, that ass whooping was no different then the first time u had to guard @theofficialai3 @starburymarbury @iambarondavis #ME we beat that ass and that didn’t stop u from putting on that jersey 💯 a great ass whooping by someone is what makes a champion 🗣 lick ur wounds, watch what u did wrong, watch what u did right,adjust,study becuz it’s never where u start it’s where u finish 💯 u said u we’re doing this for all the hoopers then u should know a real hooper bounce back game is litty🔥 (miss the free throws to win the game “everyone laughs” then hit they asses with the #51 #61 like @damianlillard 💯💯 🗣 @jakepaul run that shit back #nate had to get that first nut out the way “too excited” #holdat will be ready for round 2 #respectTheprocess #Teamnate

Since Robinson was brutally knocked out by Paul, he figures to reconsider making a run in boxing after seeing how dangerous the sport can be if you aren’t ready for it. But if was up to Arenas, Robinson would get back in the gym and fight Paul again.

Do you agree with Gilbert Arenas that Jake Paul vs. Nate Robinson should be run back?