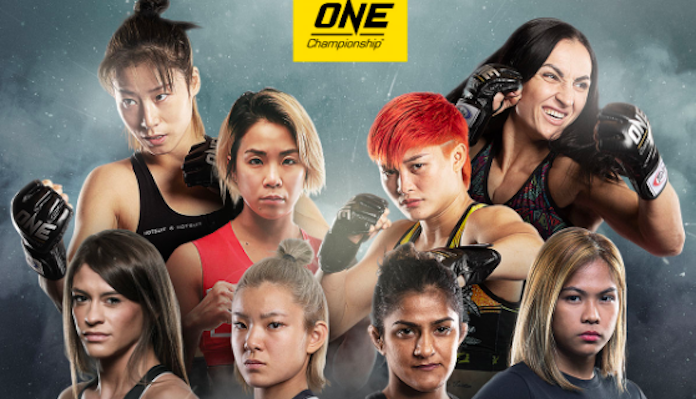 ONE Championship has announced the eight-woman lineup for its anticipated Atomweight World Grand Prix.

ONE has been teasing its Atomweight World Grand Prix for quite some time, and on Wednesday, finally revealed the eight woman that will compose the tournament lineup.

See the promotion’s big reveal below:

The ONE Atomweight World Grand Prix will kick off on May 28. Matchup announcements are forthcoming.

In the meantime, here’s everything you need to know about the eight women competing in the tournament.

China’s Meng Bo is the only woman with a win over UFC strawweight champion Weili Zhang. She’s currently riding a trio of ONE wins over Laura Balin, Priscilla Hertati Lumban Gaol, and Samara Santos. With a well-rounded game and tons of experience, she immediately stands out as one of the favorites to win this tournament.

Seo Hee Ham is a brand new signing by ONE Championship. She is widely considered the best atomweight in MMA history, with previous title wins in RIZIN and Road FC. She has also competed in the UFC, though that feels like an insignificant chapter of her career in hindsight. Like Meng, she will be one of the early favorites to win this Grand Prix.

Stamp Fairtex, the former ONE atomweight kickboxing and atomweight Muay Thai champion, is easily the best pure striker in this Grand Prix. Since transitioning into MMA, she’s beaten the likes of Asha Roka, Bi Nguyen, and Sunisa Srisen. In her last fight, she lost via last-second submission to Alyona Rassohyna.

As we just covered, Alyona Rassohyna just picked up a huge submission win over Stamp Fairtex. That bout marked the Ukrainian’s successful ONE Championship debut. With that outcome, she’s now finished 11 of her 13 wins by way of submission. If math isn’t your strong suit, that’s a submission rate of over 84 percent.

Xtreme Couture’s Alyse Anderson is a newcomer to ONE Championship and will make her promotional debut in the Grand Prix. Her last three fights occurred in the Invicta cage, where she first lost a decision to Shino VanHoose before rebounding with a submission win over Stephanie Alba and a decision win over Katie Saull.

Japan’s Itsuki Hirata is widely considered one of the hottest prospects in ONE Championship, and is a dark horse to win this Grand Prix. The popular 21-year-old is a decorated judo specialist with nasty submissions and vicious ground-and-pound to boot. She’s riding a TKO win over Miku Nakamura, which occurred earlier this week in Tokyo.

Like Hirata, India’s Ritu Phogat is a red hot prospect, and a definite dark horse in this Grand Prix despite her inexperience. A former Commonwealth Wrestling Championship gold medalist, she is unbeaten in MMA. Her best win occured in her last fight, when she smashed the more experienced Jomary Torres to a first-round TKO.

Denice Zamboanga, a native of the Philippines, currently holds the No. 1 spot in ONE Championship’s atomweight rankings, and was briefly expected to challenge Angela Lee for the division’s title before the coronavirus pandemic took hold. She’s a former training partner of Stamp Fairtex, and holds wins over fighters like Mei Yamaguchi and Jihin Radzuan. She should be one of the favorites to win this tournament—if not the favorite outright.

Who are you picking to win the ONE Championship atomweight Grand Prix?